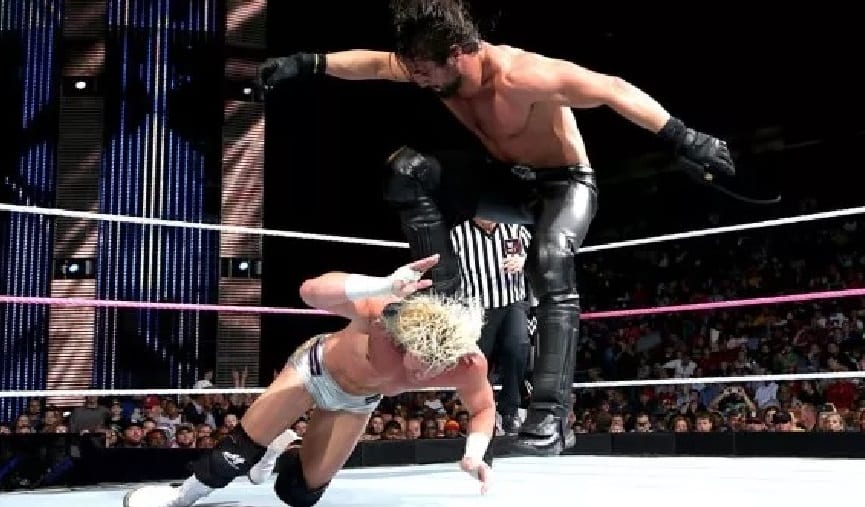 Seth Rollins had to remove the Curb Stomp from his move set for a while because it was controversial. Not only is it an actual move anyone could do if you find someone bent over, but it also had very violent connotations. So Rollins used the Pedigree for a while as he represented The Authority and it seemed to work out well for him.

For a while, the Curb Stomp was edited out of WWE footage like it was Chris Benoit but then it suddenly came back renamed “The Stomp.” Dolph Ziggler answered Seth Rollins’ IC Title Open Challange on Raw this week and the two had a pretty intense match but even though Rollins won, he didn’t pull off the win by using The Stomp.

Bryan Alvarez was asked during Wrestling Observer Live why Rollins won with the superplex into a falcon arrow spot instead of his typical move and whether WWE had banned Rollins’ finisher once again. Thankfully, that is not the case, but WWE did have a very good reason for making the decision they did.

“They’re trying to get over another finish for him. He does the falcon arrow in every match. It never wins, people still go crazy for it. The fact that he won with it is gonna make it a hotter nearfall from now on.”

“So he went for the Curb Stomp twice in that match and didn’t get it, so it’s not like it’s gone.”

Doing this kind of thing for a Superstar is great and gives an added extra something to the audience’s enjoyment of a match. A new level of suspense will now be present every time Rollins hits the superplex into a falcon arrow spot because he was able to topple Dolph Ziggler during the worst Raw in the history of Milwaukee.

Only time will tell whether WWE will start booking Rollins to win more often with this impressive move, but it’s always gotten over with the crowd and some were starting to wonder if this move might become like the Deep 6 is to Baron Corbin where it looks impressive but never closes the deal.