X-Pac says he was backstage when WWE officials realized that Enzo Amore was sitting ringside. Eventually they sent security, and when Amore saw security approaching that’s when he stood up on his chair. The female security guard who tackled Amore received a standing ovation from the locker room backstage afterwards.

X-Pac says that WWE had forgotten about Amore by the next day, and it was actually the Staples Center that printed the posters of Amore that were placed at entrances for RAW the following night. He points out that he hates to talk bad about Amore because he knows him a bit, but he can’t give advice to someone who doesn’t take advice. He points out that WWE didn’t take anything from Amore, Amore took it from himself by acting the way he did. 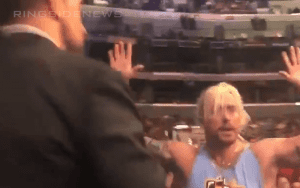 He thought Charlotte and Ronda Rousey had an amazing match. It never ceases to amaze him how good Charlotte is, and there’s no denying that Rousey has been delivering big time in the ring as well. He points out that you can criticize Rousey’s tweets or the content of her promos, but she’s light years ahead of where she should be in terms of in-ring work.