X-Pac opens today’s show by talking about his cameo at NXT Takeover: War Games 2. He points out that he had a lot of fun at the event and he was thrilled to hear the live pop in the arena that night when he was introduced. He says that ovation really made him feel good, and it gave him a little taste of what appearing in front of the WWE Universe is all about. 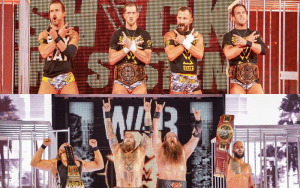 X-Pac says he loved the Velveteen Dream/Tomasso Ciampa match. He loved the multiple teases that Dream was going to win the Title, and he thought these two men worked really well together. He notes that it wouldn’t have been a mistake to put the NXT Title on Dream, but then they’d have to find a creative way to get it off him at some point. He also doesn’t think anyone in NXT is in a hurry to expedite Dream’s ascension to the throne of NXT.

He likes where they’re going with Matt Riddle/Kassius Ohno feud. He notes that this could light a fire under Ohno, who could be feeling some frustration there given his role on the show over the past couple of years. X-Pac points out that because he’s been in positions like that before, where you feel like you should be utilized in a different way than you are. Regardless, X-Pac points out that Ohno is one of the best workers out there.