She informs that she learned a lot from Kipp Sopp (Billy Gunn) during this period, as he was part of The Beautiful People for quite some time as well. She notes that he’s a funny guy who still trains like he’s 20. Ross adds that Sopp is legitimately 6’5” and an alpha male in every sense of the word at anything he does.

Love thinks Rousey has done great since transitioning to professional wrestling. She points out that it’s hard to come from the MMA world, where you’re trained to go all out at all times. Then you transition to the wrestling world where you have to learn to hold back. Ross thought Rousey worked her ass off last Sunday and he felt bad for her when she was booed after the match. That didn’t make any sense to him at all. 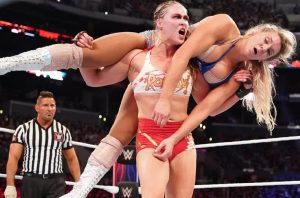 Love says she’s so happy for Becky Lynch, who’s hot as hell right now. She notes that this kind of connection with the audience is special and doesn’t happen often. Ross hopes WWE lets it develop naturally instead of forcing her to be a heel. Love points out that Lynch is the Stone Cold “babyface heel” at this point.

That sums up this week’s episode of The Jim Ross Report. You can listen to the show yourself anytime here, and I’ll catch ya next week for another recap!