Getting back to Survivor Series, Ross says he loved the Buddy Murphy/Mustafa Ali match but he just wishes he “gave a damn” about it. He doesn’t watch 205 Live regularly so there’s no emotional investment there. He doesn’t think that’s going to change until those performers are showcased on Raw or Smackdown, adding that there’s lots of good cruiserweight talent not being showcased right now. 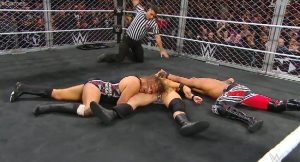 Moving on to NXT Takeover, Ross says he wants to thank all the guys in the War Games match for their work ethic. He thought the match was a little bit too orchestrated at times and it also ran a little long in his opinion, but he liked the match and he hopes they do it again because it’s a great attraction match.

A listener writes into the show asking about the rise of the women’s division. Ross thinks there’s a simple explanation for the rise of women’s wrestling; the women are connecting with the audience better than most of the men at this point. He points out that he cares about the Becky Lynch, Charlotte characters. Ronda Rousey was a made star when she got to WWE so that always helps, but there’s still lots of untapped potential in the division in the likes of Asuka for example.