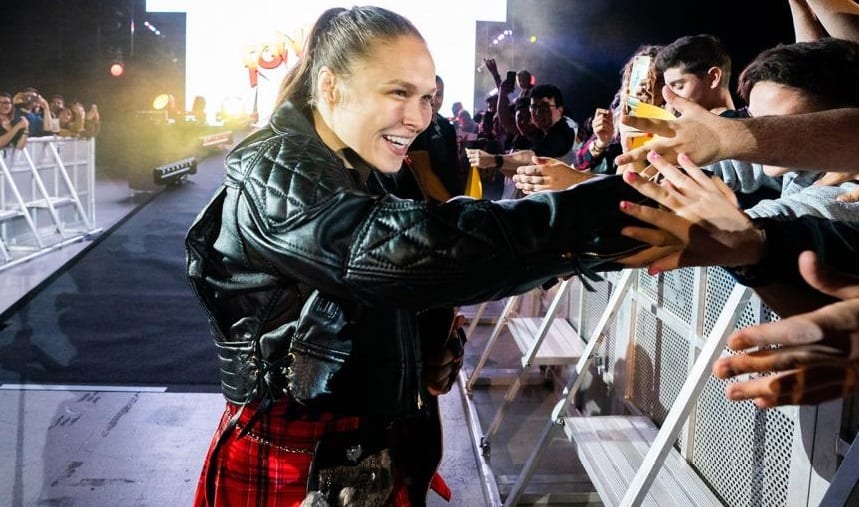 Ronda Rousey came into WWE with a huge name behind her already. It was only a matter of time before she was making headlines outside of WWE once she signed and it didn’t take long at all. But even though she’s a full-time WWE Superstar and current Raw Women’s Champion, she doesn’t have the kind of busy schedule as her coworkers might have.

Rousey recently spoke to The PWI Podcast where she talked about the touring schedule and disclosed that she didn’t even know house shows were a thing. Because all Ronda knew about was Raw and SmackDown Live so she just assumed WWE Superstars got the rest of the week off. She also tackled the subject of having a much lighter schedule than everybody else.

“Being on the road and everything just gives me so much more respect for what everybody else does. I mean honestly, when I came into this I thought that everybody just wrestled once a week. I thought that they just showed up to Raw and SmackDown and like that was it.”

“I didn’t even know there were live shows throughout the week and the fact that these people just go nonstop. Like I have nowhere near the schedule that everybody else has. You know like if I’m on a week with 5 shows it takes me at least a week to recover from it and if anything I have the super easy tourist version. You know like I have nothing to complain about. I do whatever I can to perform whenever they need me to perform and you know I have a much easier schedule than everybody else. Like yeah, I’ve worked really, really hard and i try to do everything that I can.”

“But I have an amazing life at home. I have an amazing family they’re just so supportive and fantastic. I could see how it could be difficult for someone who doesn’t have an amazing homelife to be able to be in both worlds at once but I’m so lucky to have the most amazing husband and kids and they’ve been with me in my corner like all the way and yeah, I told you like I’m living a dream, I would do this for free. Like I could be sitting around doing investments all year and make a lot more, I’d rather be doing this.”

It doesn’t seem like Rousey will be slowing down at all. Therefore, she’s likely to keep entertaining WWE crowds for a long time to come, especially while she’s Raw Women’s Champion. But WWE obviously realizes how much value is in Rousey’s name which is why they are able to cater to her schedule outside of the company. But it only makes her respect her coworkers in the WWE locker room even more with every bump she takes at a WWE house show.