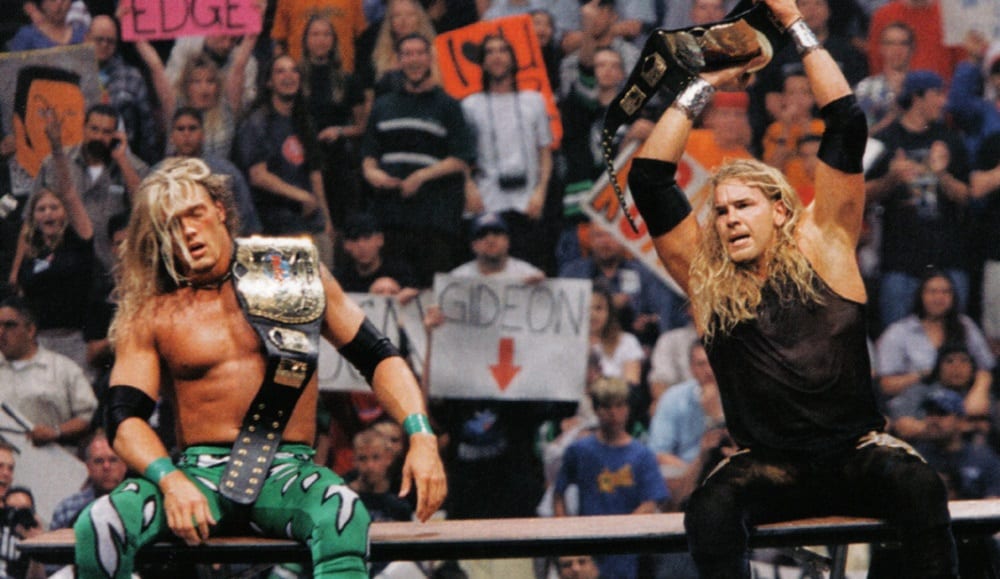 Edge had a storied career in WWE that was ended far too soon when he was forced to retire due to accumulating so many neck injuries. He fought hard and won the fan’s respect and the WWE Universe still misses seeing The Rated R Superstar on a weekly basis. But much of his success wasn’t on his own because he was often paired up with his life-long friend Christian.

Edge and Christian are 2 names which are synonymous with each other at this point, but as Edge revealed on Primetime With Sean Mooney, there was a plan WWE had devised to break them up much sooner than they actually did which could have robbed the WWE Universe of plenty of 5 Second Poses and other treasured antics.

“Well, I think because it was the first one that either of us got to perform on. I’d been at WrestleMania’s as a talent. I was there as the new kid for WrestleMania XIV in Boston, but I was watching from the crowd, and went out there and was able to watch that show. The next year we did the thing with Bossman and Undertaker so we were on the show but we didn’t wrestle on the show. WrestleMania 16 felt like our moment.”

“We knew we had the proper players for that stage too, because we had The Hardyz who we already had this insane chemistry with, and now The Dudleyz who we also had this insane chemistry with so we just knew that if you put us all in there with these stakes and with these tools that we were gonna be able to create some amazing things and this was a first-ever again, and any time you have a first-ever, they go horribly wrong, or because you have this blank canvas, you can do anything, and we just all felt that-that could be the case.”

“Now, up until a couple of weeks before they had talked about splitting Jay and I up at that pay-per-view. So, the fact that we went out, we did commentary – we got a chance to do commentary and they went, ‘Woah, these guys are entertaining’. Hold on a second because up until that point we had been kind of the silent brooding baby-face tag team, and we actually got a chance to dip into our personalities and show our sense of humor and kind of what we could do and then we heard, ‘Okay, actually you’re gonna be winning the Tag Team belts’.”

“Now, for these two kids that met in the sixth grade over a ninja star, to be told at WrestleMania 16 that you’re gonna be winning the tag team belts which is something we told ourselves we were always going to do… Even though I’d won the I.C. belt by that point, this was still the… again, I got to win the Intercontinental Title in Toronto in my hometown in [the] Sky Dome and then I get to, with my life long friend win the Tag Team Titles at WrestleMana in a first-ever match, you can’t ever expect those things to happen.”

Thankfully, WWE decided against breaking up the team that Totally Reeks Of Awesomeness. The two would split up down the line, but it was after much more fun.