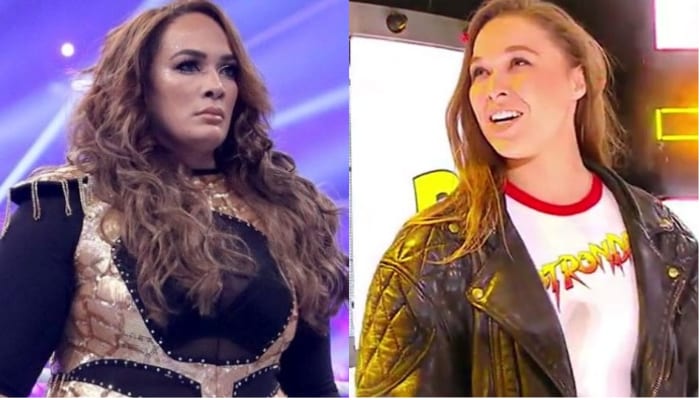 Ronda Rousey had her first singles match in WWE against Nia Jax at Money In The Bank early in the Summer this year for the RAW Women’s Championship. There, it seemed Rousey would be successful until Alexa Bliss cashed in her briefcase and pinned Jax to take the Championship herself.

As showcased at SummerSlam, Rousey got her revenge on “Little Miss Bliss” as she defeated the Champion to capture the Championship. Jax, however, hasn’t been in the title picture since she lost the Championship to her former ally in Bliss.

At the first-ever all-women’s PPV Evolution, Jax was successful in being the last woman remaining during the large Battle Royal. This solidified her as a future challenger for the RAW Women’s Championship, and it didn’t take long for Jax to reveal which Championship she is going after.

During an interview with SportsBible, Jax gave an insight into how her first match with Rousey went and went on to claim that the two have unfinished business and insinuates that the story between the two is just beginning.

“It was pretty incredible

“I was in there with one of the greatest athletes in the world and she is, being in the ring with her, you can tell.

“And she has a great work ethic, she’s incredibly strong and I feel like we have some serious unfinished business that I really want to get back to where we started.

“I feel like we started something really special and it can only get better so I can’t wait to see where it goes.”

For the time being, Rousey is embroiled in a feud with SmackDown Women’s Champion Becky Lynch, as the two prepare to meet at Survivor Series next Sunday. However, Jax is lurking in the background and is expected to challenge Rousey at the next available chance.

In this rematch from Money In The Bank, who is your pick to leave with the Championship? Do you believe Rousey has improved over time? Let us know your thoughts, opinions, and reactions in those comments below.