Lawler talks about his experience on the Chris Jericho Cruise. He informs that he had a terrific time and although the fans had a lot of energy and enthusiasm, they were all very well behaved. He notes that there wasn’t a lot of privacy for the wrestlers because those fans paid good money to be on a cruise with their favourite wrestlers, so he didn’t want to turn down any picture or autograph requests. However, all the fans were very respectful which was nice. 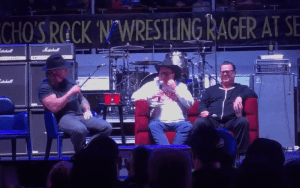 Lawler informs that Jericho was so busy during the entire cruise but his energy never wavered, even after taking a guitar in the face during one musical performance that required stitches.

Lawler talks about the return of Hulk Hogan at last weekend’s Crown Jewel event. Lawler says that Hogan has been without a doubt the most important wrestler to the business’ success over the years and he was glad to see him return at Crown Jewel. He’s known Hogan for a long time, and in his opinion Hogan’s a good person. Some of the things that have been said about Hogan over the last couple of years simply aren’t true according to Lawler.