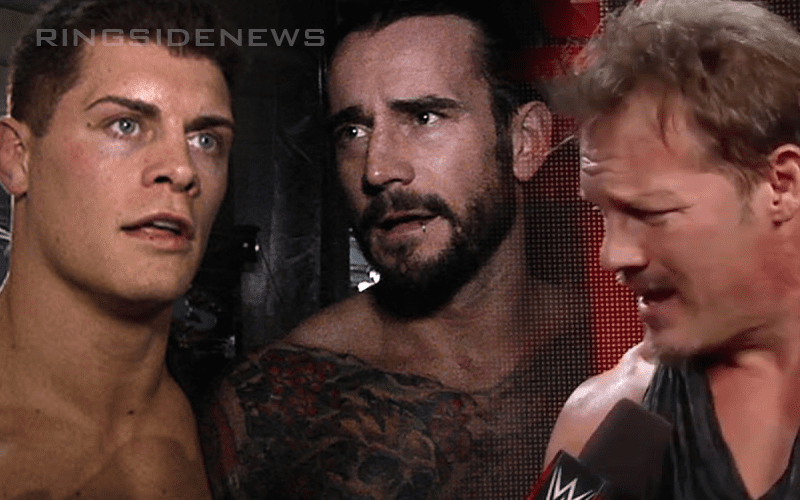 CM Punk is not a part of the WWE Universe anymore except by memory, and that’s the memory supplied by fans and not WWE’s version of history at all. During his time in WWE, he was a fan favorite, but apparently, he wasn’t too appreciated behind the scenes, especially when he declared himself a leader.

During a recent episode of Talk Is Jericho recorded on Chris Jericho’s Cruise, Cody Rhodes opened up about the idea of a locker room leader. It can’t be a self-appointed title but instead, something that must be shown to everyone through their tireless efforts to set an example to the rest of the roster.

Then Chris Jericho was reminded of a similar experience he had with CM Punk when he had issues with how the Second City Savior conducted himself behind the scenes as well.

Cody did remember the event although he didn’t get into specifics much. However, it was confirmed that CM Punk had declared himself a locker room leader in WWE more than a couple times. Jericho chimed in with his own member as he recalls saying, “You don’t lead me,” to one of CM Punk’s claims that he was an example to live by behind the scenes in WWE.

This led Cody Rhodes to elaborate on the subject of CM Punk declaring himself a locker room leader as well.

“It worked on a certain demo of the locker room. But there was one meeting with Booker T was in the room and Punk hit the, ‘As the locker room leader, I’m telling you guys all to pick up your trash.’ Booker literally threw his trash on the floor and said, ‘He’s not telling me to pick up my trash!’ They had this whole interaction. [Kane] is the only actual locker room leader. He’s the Mayor now.”

Since CM Punk’s 2014 departure from WWE, it seems like they have been able to move on when it comes to replacing him in the locker room. Roman Reigns was considered a locker room leader but since his own departure, there is an even bigger gap to fill. Roman will be back after he beats leukemia, but fans might never see CM Punk back in WWE unless a pro wrestling miracle can take place.

Thanks to Comicbook.com for the quotes