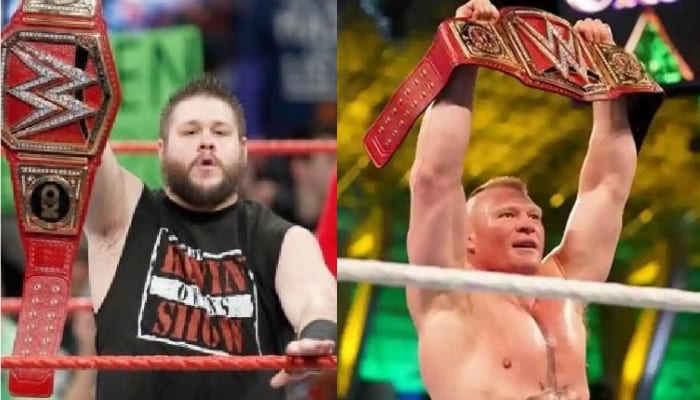 When WWE split up the brands, the WWE Championship went to SmackDown Live and while they didn’t change the title’s color to blue, they certainly made sure fans knew the Universal Title belonged to Raw by making it a big red belt.

Throughout the Universal Title’s history, it has angered fans. Some people hated the way the title looked in the first place causing a Brooklyn crowd to boo before the match at a new championship which is incredibly rare.

Each title change seems to draw heat from fans from Finn Balor having to vacate the title the night after he won it to become the first-ever Universal Champion to Brock Lesnar’s defeat of Braun Strowman at WWE Crown Jewel. But a recent survey sent out by PW Mag, a very popular Twitter profile might show a lot in the data.

While 39% of the 4,237 polled agreed that Brock Lesnar winning the Universal Title at WWE Crown Jewel is the title change that made them the angriest, even more, agreed that Goldberg ending Kevin Owens’ run as Universal Champion made them angrier with 42% of the vote.

Finn Balor vacating the Universal Championship to end the inaugural reign as champion with the title got17% of the vote as well which is interesting. However, due to so many people who were angry at Goldberg winning the title in the first place, only 2% were upset about Lesnar defeating Goldberg at WrestleMania to start his long reign as champion.

From the beginning the WWE Universal Title might have been a bad idea. Fans even hated the way the belt looked and booed the hell out of it at SummerSlam. It’s always drawn heat. Which UT change made you the most ANGRY? Obviously “upset” would be Roman— but let’s focus on anger-