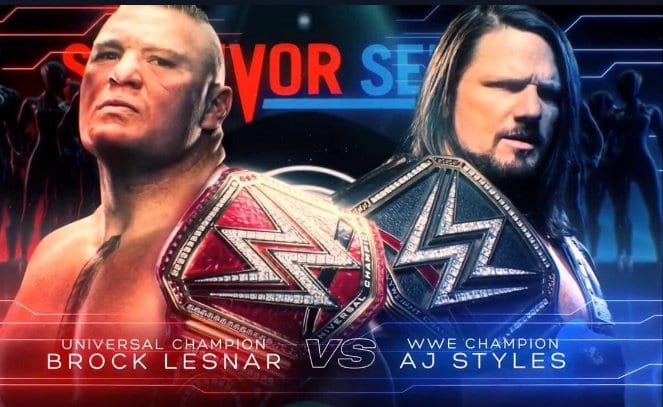 Brock Lesnar and AJ Styles faced off against each other at last year’s Survivor Series when WWE threw together the exact same booking plan. Actually, it was supposed to be Lesnar vs Jinder Mahal, but Styles captured the WWE Championship beforehand and changed up the match. But now that Lesnar is the Universal Champion once again this sets up Lesnar vs Styles II.

Dave Meltzer noted on Wrestling Observer Radio that since Brock Lesnar won their match last year, it’s Styles’ turn if you’re going with WWE’s 50/50 booking logic. But to book Brock losing is going to be a tricky angle to pull off. However, there is an angry babyface Monster Among Men waiting in the wings who is apparently still the #1 contender for Lesnar’s title even after the squash match at WWE Crown Jewel.

“So AJ and Brock is really interesting because if you look at it from one standpoint they wrestled before and Brock won so in a sense Raw won so they’re doing it again so it should be SmackDown’s turn, it should be AJ’s turn. But, if Vince has Brock lose to AJ, don’t you think that weakens the eventual win by Strowman?”

It was noted that if Strowman helps AJ then “that’s the right way to do it.” Only time will tell how WWE will book themselves out of this situation. They are still trying to shift things around in a big way after losing Roman Reigns, a man they had placed a huge amount of focus on and was largely factored into their plans in the foreseeable future. But Styles winning over Lesnar on November 18th could make a lot of sense, especially if Braun Strowman is around to assist in that victory.