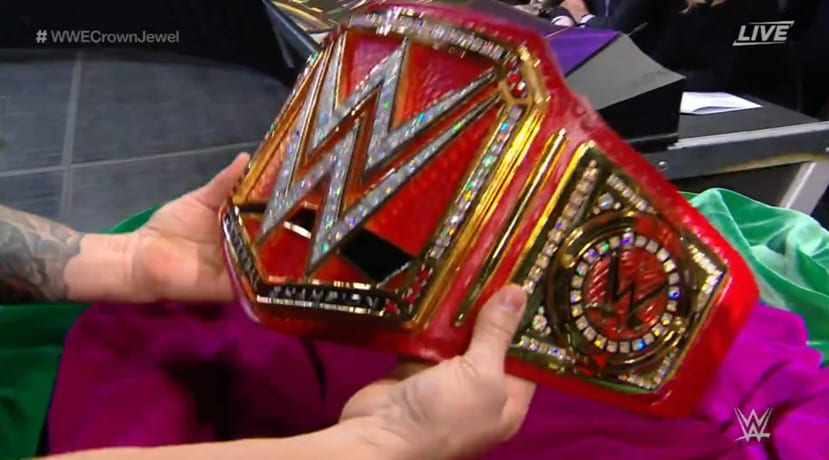 WWE Crown Jewel was set to be a night where Roman Reigns would walk into Saudi Arabia and walk out as Universal Champion. But his sad announcement that he has leukemia meant that he had to relinquish the title he fought so hard for. A new champion was to be crowned at WWE Crown Jewel as he was taken out of the match and the triple threat was turned into a singles encounter.

Braun Strowman vs Brock Lesnar worked before and the Crown Jewel crowd was more than excited to see this historic match take place. Paul Heyman promised a spoiler that his client would walk out of WWE Crown Jewel as Universal Champion, but it was up to Braun Strowman to make sure that didn’t happen.

Baron Corbin came out before this match started to laugh at the crowd and draw a massive amount of heat on himself for just being there. He placed the WWE Universal Title on a platform at ringside and then the monsters made their way to the ring.

Brock Lesnar and Paul Heyman were incredibly over with the KSA crowd and they knew everything Heyman was going to say in his intro as well. Baron Corbin blasted Braun Strowman with the Universal Championship and then the bell rang.

Braun was rocked and climbed up Brock Lesnar to take a 4th F5 where Lesnar just launched Braun over the ropes to the outside of the ring as the official started to count. Strowman got back in the ring and stopped the referee’s count but he couldn’t get to his feet easily. Then Lesnar took off his gloves and went for another F5, but Braun got out of it.

Then Lesnar scooped him up once again and hit another F5 to win the Universal Championship once again.