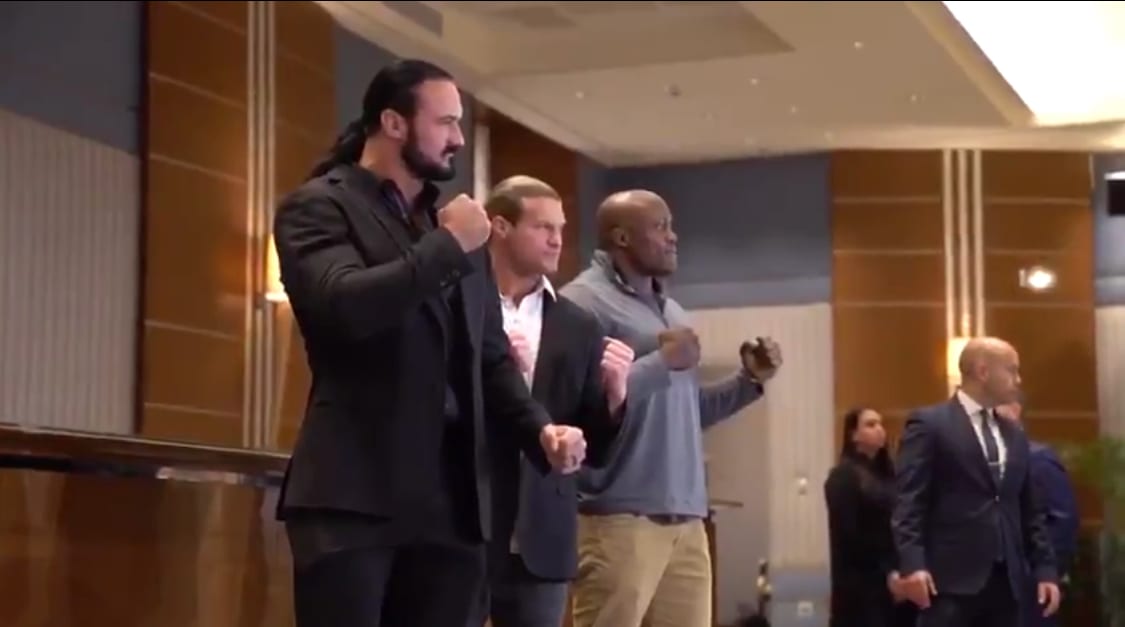 WWE Crown Jewel is just the beginning of WWE’s 10-year partnership with the controversial Kingdom. John Cena and Daniel Bryan both decided not to go on the trip with WWE even though they had been previously promoted to attend — now the Saudi Arabian Sports Authority has released several videos of WWE Superstars praising KSA.

Videos featuring Kurt Angle, Seth Rollins, and Dean Ambrose were released where they spoke about the enthusiastic Saudi Arabian fanbase, how important the deal with KSA is, and how exciting the WWE World Cup Tournament is going to be at WWE Crown Jewel.

Other videos also include Drew McIntyre, Bobby Lashley, Dolph Ziggler as well where they appear more than happy to be performing in Saudi Arabia.

During one interview, Drew McIntyre said of the Saudi Arabian deal:

“Considering the last show how big it was and how quick tickets sold for it the only way to go is up, and up, and up. It’s just going to keep growing the relationship with the Saudi WWE Universe is just going to get to be as big as possible — I don’t see a limit to be honest.”

“I think it’s very exciting that it’s because of the fans’ interest which is why we’re back so quick and it’s because the fans want us here, we want to be here. I’ve said over and over and over I’ve literally talked to the fans one-on-one and they are beyond excited, they’re beyond passionate, they’re beyond knowledgeable, and that makes me want to come here as much as possible.”

Only time will tell if WWE will air videos praising Sadi Arabia during the actual WWE Crown Jewel event, but they always have the ability to shoot promos that aren’t shown to American audiences. We will keep you updated on this situation as we move closer to the controversial event.

🤼‍♂ Dolph Ziggler: I hope to participate in the three fights of #WWECrownJewel tomorrow and to win the WWE World Cup. pic.twitter.com/OBgXJjJImF

🤼‍♂️ Seth Rollins: I am looking forward to the #WWECrownJewel on Friday. pic.twitter.com/lVH1bFuQCC

🤼‍♂️ Drew Mclntyre: the relationship between the Saudi General Sports Authority and WWE will be greater than before. The fans here are very interested.#WWECrownJewel pic.twitter.com/fY0JHs7eS1

🤼‍♂️ Bobby Lashley: I am very content to have chosen to participate in #WWECrownJewel, it is a great opportunity to meet WWE fans in Saudi Arabia. pic.twitter.com/zLHeO0EsGe