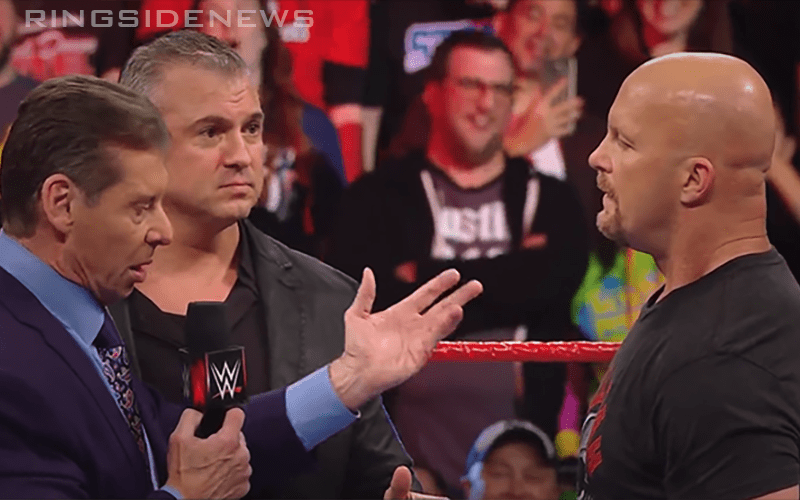 ‘Stone Cold’ Steve Austin has been a retired professional wrestler for years, but that hasn’t stopped “The Rattlesnake” from throwing a few potential match teases out there over the years.
In fact, Austin retired after his defeat to The Rock at WrestleMania back in 2003- well over a decade ago. Since that time, Austin has had appearances on television and even briefly hosted a podcast on the WWE Network, but he has never gone back to the squared circle as a competitor.
During a recent episode of Austin’s podcast, he had Joey Styles on. The two joked about facing one another at WrestleMania, and what started out as a joke led to Austin revealing that McMahon gets “hotter than hell” whenever he has teased a possible return match.
Here is the interaction between the two:

Austin: “I just got back from my fitness program, trying to get back in shape, so I was eating meal number two,” Austin said.
Ryan: “Getting in WrestleMania shape?” Ryan asked.
Austin: “Only if it’s going to be you and me, Joey. Austin and Ryan!” Austin joked.
Ryan: “You’re going to have to politic for that one. You’re going to have to politic hard for that one,” Ryan replied.
Austin: “Austin and Ryan at [WrestleMania] 35! If I make the call, it’ll happen.” Austin claimed. “Dude, anyway, I’m not going to tease it that much because Vince always gets hotter than hell at me if I tease a match.”

This is interesting, given how historical Austin’s exit from the company was and what legacy he has left behind. Continuing, though, and Austin and Ryan talk about ALL IN- the independently produced show by Cody [Rhodes] and The Young Bucks.

Austin: “These people were on fire the whole damn time. I would have loved to have worked in front of that crowd. They were on fire,” Austin said.
Ryan: “I’m sure [Cody and The Young Bucks] would have given you a spot if you wanted to come work,” Ryan deadpanned.
Austin: “I might call them next year. You’ve always got to save something for the next one,” Austin responded.

At this point in his career, it is unlikely Austin will step back into the ring as a competitor. However, it is likely he could show up at the proverbial ALL IN 2 show to hit a Stunner or two on some of the Superstars who are active on the show.
How do you take hearing that McMahon “gets hotter than hell” when Austin teases a return? Do you want to see Austin at ALL IN 2? Let us know your thoughts, opinions, and reactions in those comments down below.
With H/T to Wrestling Inc. for the transcription.