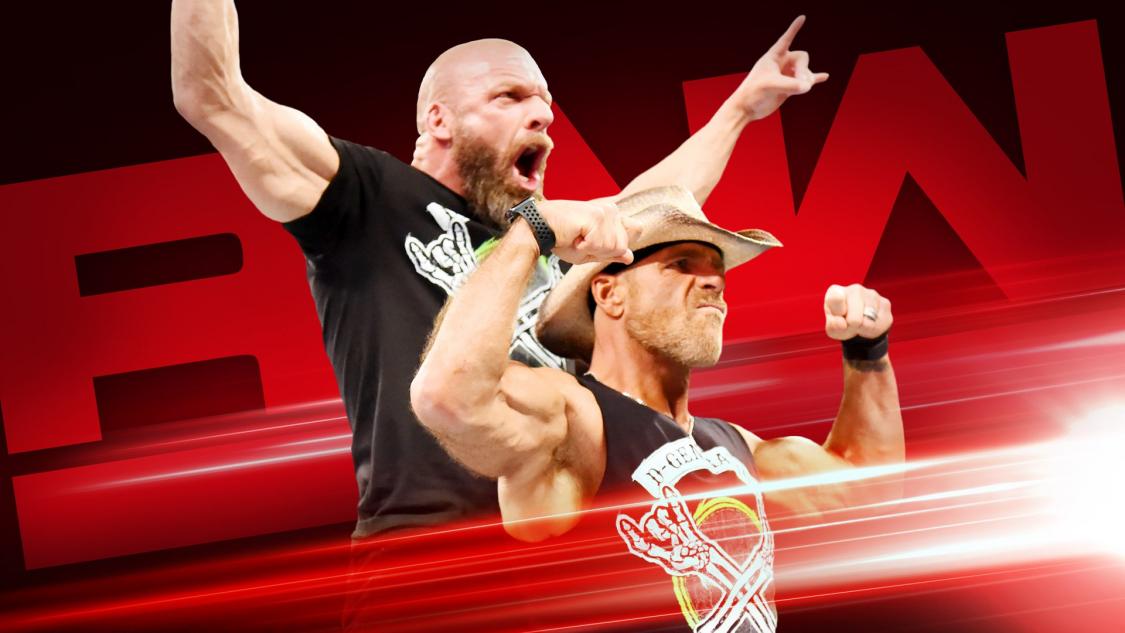 We’re back and Trish Stratus and Lita make their entrances. Next Sunday, they’ll take on Alexa Bliss and Mickie James at WWE Evolution. Lita greets her “old friend,” Philadelphia. Lita says it’s good to be back home. One week from Sunday is the first ever all women’s PPV, WWE Evolution.

Alexa Bliss’ music cuts her off, and she comes out to the stage with Mickie James. Bliss says she’s a future Hall of Famer, so she gets Lita, who is a current Hall of Famer. Bliss thinks Lita must be terrified about being humiliated going into Evolution knowing the Goddess will run wild on her. Mickie James acts crazy and imitates Trish Stratus. James claims Stratus knows that James has always been better than her. Bliss says James does Stratus better than Stratus. Bliss says if they think they’re going to come into Evolution and beat them, it’s going to be bad. James says they’re sadly mistaken if they think they’re going to get off the couch and come for them with no warm-up.

Stratus says at Evolution, they have a chance to make history. Lita says these two could make their careers beating two Hall of Famers and they’re talking practice. Lita says they might be right. They could use some practice. Stratus says practice makes perfect. They challenge Bliss and James. They begin walking down to the ring before stopping, turning and walking away.

Bayley is walking backstage when The Riott Squad makes fun of her, particularly for being without Sasha Banks and walk off laughing. Natalya will take on Ruby Riott later tonight. The main event will see The Shield take on Strowman, Ziggler, and McIntyre.

We’re back for the handicap match and Angle is in the ring, wearing the conquistador outfit from last week.

Baron Corbin comes out to the stage to watch this match. Angle dances in the ring before trying for a German Suplex on Akam. Akam gets out of it. The commentators say this doesn’t seem like Kurt Angle. The Angle imposter soon goes for an Angle Lock, but he’s knocked out. AOP soon hits him with a powerbomb/neckbreaker combo for the win.

Drake Maverick gets in the ring and tells them to take the mask off, but it’s an unknown jobber. Kurt Angle then runs up from behind and hits Corbin with an Angle Slam on the stage. Angle celebrates doing the weird Spanish dance.

Backstage we see Natalya’s dressing room and the Riott Squad have covered it in ketchup and mustard. Natalya will face Ruby next!

Riott comes back with a back elbow for a two count. Riott attacks, but can’t put her away. Natalya slaps her and applies a Sharpshooter, but Sarah Logan chop blocks her.

We see Elias choosing a guitar pick from a stage hand and belittling him. He’ll be out to perform live, next!

Elias is sitting in the ring as we come back. Elias strums a chord and greets the crowd. Elias plays something that sounds like the intro riff to Metallica’s “Nothing Else Matters.” Elias says his eyes are like a crystal ball looking into the future. That future is a universal truth that John Cena and everyone else knows, and that is that WWE stands for Walk With Elias. Elias says he was with Carson Wentz, who says his injuries were painful. The real injuries are mental when he has to care about performing for the depraved city of Philadelphia. The crowd loudly boos him. Elias tells them to silence their cellphones and shut their mouths.

Apollo Crews’ music hits, and he comes out to the stage with a microphone – to no reaction unfortunately. Crews says he just wants to interrupt him since everyone else does. Elias says he’s the best thing going, so of course Crews would want to be out here. Crews better pray to be on Elias’ good side. Tonight is not the night Elias will make a star out of Crews. Crews says he’s not like Elias. He doesn’t play the guitar and isn’t that funny. None of that matters when he steps inside the ring. Elias has heard that Crews is talented, but he’s never seen it. It’s like Bigfoot or The Flyers winning the Stanley Cup. Crews has watched too many people pass him by, and he’s sick of it. Crews catches him with a step-up enzuigiri before holding him up in a military press and slamming him down. Crews then poses on the turnbuckles.

Backstage, Roman Reigns is talking with Dean Ambrose, but we can’t hear what they’re saying, Cole says they’re talking tactics. The main event is next!

Strowman and his goons are out first, while The Shield come out second through the crowd.

Dolph starts the match against Rollins. Ziggler gets Seth in a headlock, but gets shot into the ropes. Seth with the drop-down, leapfrog, then a body slam. Ambrose tags in and the two of them hit a leg-split on Ziggler. Seth and Dean begin arguing, which prompts Reigns to come in and separate them. Strowman clears Seth and Dean from the ring, then Ziggler connects with a snap DDT to Reigns for a two-count.

We return to see McIntyre keeping Reigns down with an armbar in the middle of the ring. Reigns starts to fight back but McIntyre plants The Big Dog with a spinebuster for a two count. Drew makes the tag to Ziggler and keeps Reigns down with another submission. Reigns throws Ziggler into the ropes and takes him down with a lariat. Ziggler ignores Strowman and tags McIntyre, who gets taken down right away with a clothesline. Braun gets the tag and cuts Reigns off. Drew tags himself back in and stomps Reigns into the mat. Strowman and co. keep beating on Roman in their corner., but arguing amongst each other while they do so.

Reigns avoids Strowman in the corner and hits a Samoan drop to the big man. Reigns takes the Claymore and the Zig Zag, but Ambrose and Rollins are there to break up the pin. The Big Dog catches McIntyre with an uppercut before he tags Rollins. sETHbrings Ambrose in and they take out McIntyre and Strowman with some double team moves. They hit double suicide dives on both sides of the ring, but Braun catches them during the second one. Reigns hits him with a Superman Punch to break his grasp. Ambrose hits McIntyre with Dirty Deeds, but Dolph shoves Rollins into him to break up the pin. Dean and Seth argue until they get into a fight, and Ambrose tries to hit Dirty Deeds to no avail. Ziggler takes advantage and hits the Zig Zag on Ambrose for a near-fall.

Reigns saves Ambrose from the Claymore with a Superman Punch to McIntyre. Drew accidentally nails Braun with the Claymore before Reigns drills him with a Spear. Rollins and Ambrose grab Ziggler so they can hit the Triple Powerbomb for the pin and the win!

After the match, The Shield leave up the ramp after the match, seemingly all kosher again. Strowman meanwhile gets into the ring and grabs Dolph by the hair. He yells at Ziggler before hitting him with the running powerslam. Strowman poses but then turns around and gets hit with the Claymore Kick! McIntyre leaves the ring and walks-up the ramp, while Strowman struggles back to his feet.

DOWN GOES @BraunStrowman…THIS time on purpose from @DMcIntyreWWE! #RAW pic.twitter.com/yqIdKLIYBF

That’s it for tonight’s Raw. Let us know what you thought of the show and come back tomorrow for all of your wrestling news!