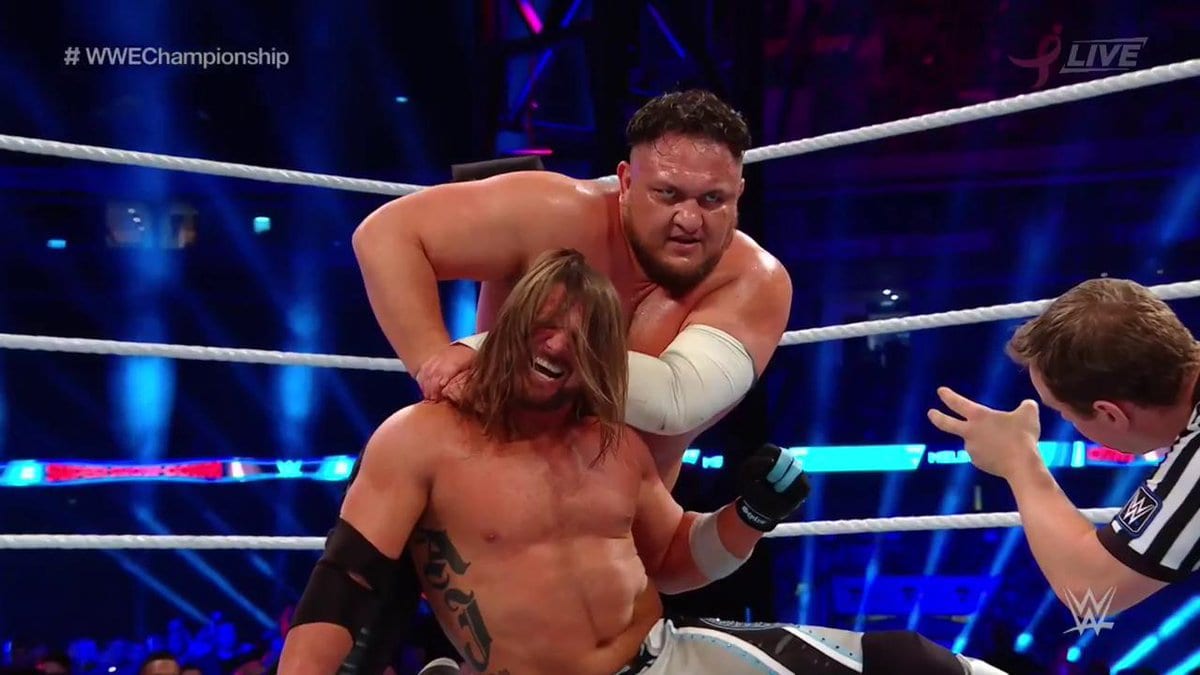 Samoa Joe and AJ Styles seemed like they would battle forever, after all, they were amazing opponents in TNA years before they both ended up in WWE. This time, AJ and Joe were fighting with Styles’ wife Wendy in the picture as Samoa Joe invaded the Styles home during this program.

They had a hard-hitting match when plenty of near falls and Styles’ mouth was busted open in the process. Then Joe went for a chair to fall in line with the no DQ, no count out stipulation. This is when Styles dropkicked the chair into Joe’s face to put him down.

Just one of the many reasons @AJStylesOrg is PHENOMENAL.#WWESSD #WWEChampionship pic.twitter.com/1EyzEwlx4p

Styles then grabbed the chair and started to unload on his own opponent. AJ was bleeding from the mouth at this point and the referee soon put on gloves. Joe reversed a springboard forearm off the chair and hit a Uranage on the chair instead before he retrieved a table from under the ring. Joe set up the chair, but Styles reversed an attempt to powerbomb him through it and ended up sending Joe through the table instead.

Joe started selling the pain complaining about how his knee popped, but Styles stayed on him only to change his focus to Joe’s damaged knee, the same knee he has a brace on. Styles backed Joe into the corner and said some things to Joe that had to be bleeped out. Then Styles went for a Calf Crusher, but Joe reversed into a Coquina Clutch but AJ was able to roll out of the ring and land a kick to the head to create separation.

The BATTLE rages on…

Styles eventually landed a Phenomenal Forearm from the barricade on the outside, but he couldn’t get Joe rolled in the ring fast enough. Eventually, AJ Styles would lock on the Calf Crusher after reversing out of a Coquina Clutch and Joe, who reached for the ropes to break up the pinfall out of instinct, had to tap out because there were no rope breaks in the match.