Lynch has mentioned in the past that she’d like to main event WrestleMania with the Four Horsewomen going against each other. Charlotte thinks that match would steal the show. As far as facing off with Ronda Rousey, Charlotte says she can see that main event match taking place at some point, but it has to be at the right time.

She says she knew the first all-women PPV would eventually happen, especially after seeing how popular last year’s Mae Young Classic was. She’s so thrilled to be a part of Evolution. 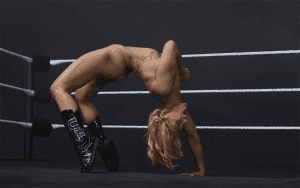 Charlotte admits that she took it so serious when fans booed her when she first debuted. As a result, she developed the Charlotte character as a fearless armoured tank so she couldn’t get hurt. She says she received so much feedback after showing some personality and twerking during a recent Mixed Match Challenge match. Some Producers told her they didn’t see anything like that from her before and they want to see that side of her more. She thinks it’s time for her to break out of her shell a bit and showcase another side of her personality.

That sums up this week’s episode of Chasing Glory. You can listen to the show yourself anytime here, and I’ll catch ya next week for another recap!