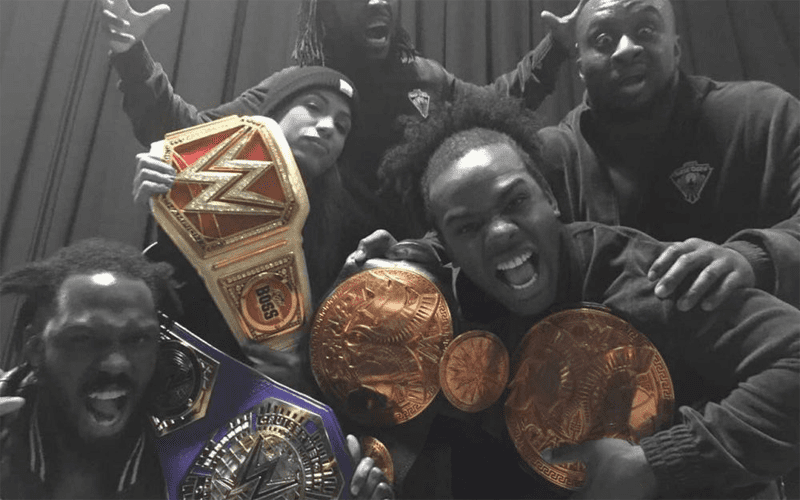 Former WWE Superstar Rich Swann was recently interviewed by Julio and Lo of Don’t Try This At Home Radio where he commented on the infamous ‘black excellence’ picture he took with The New Day and Sasha Banks back in 2016.

The picture was negatively seen throughout social media by many people, for a variety of reasons. While Big E, who initially posted the picture had no ill intent, fans were furious and made their opinions known.

Swann addressed the picture, explaining how it came about and his reaction to all the negative feedback he and the others got for it.

“Man, like Kofi, Xavier Woods and all [of us] were like, ‘Man, look at this. Look at this’, and then we all just took that picture and we all had the belts and it was dope man, and you know, I don’t think we all thought it was gonna blow up the way it did, but that picture blew up.”

Additionally, Swann also discussed why he believes the class system in wrestling is good.

“You know I feel like… for instance I know people always [say], ‘Don’t compare UFC to[wrestling] because of mixed martial arts’, but look you’ve got your people who are featherweights, you got your people who are cruiserweights, and I don’t think there’s necessarily anything wrong with a branding of a division. Like labeling somebody a cruiserweight or a heavyweight but what makes our business so unique is that if a cruiserweight and a heavyweight get into the ring – styles like Rey Mysterio, Jericho, Juventud, Eddie, Benoit. They were able to jump from that label of, ‘Oh they’re a cruiserweight [to being switched] to a heavyweight… and then if you break out and you get into the mid-card, that makes nothing but you look good and your division look good.”

Swann is currently working the independent scene and is a member of the Impact Wrestling roster. He does not appear to be returning to WWE in the future, given the way he exited the company.

Do you like Swann? Do you find the picture offensive? Let us know your thoughts, opinions, and reactions in those comments below.

With H/T to Fightful for the transcriptions.