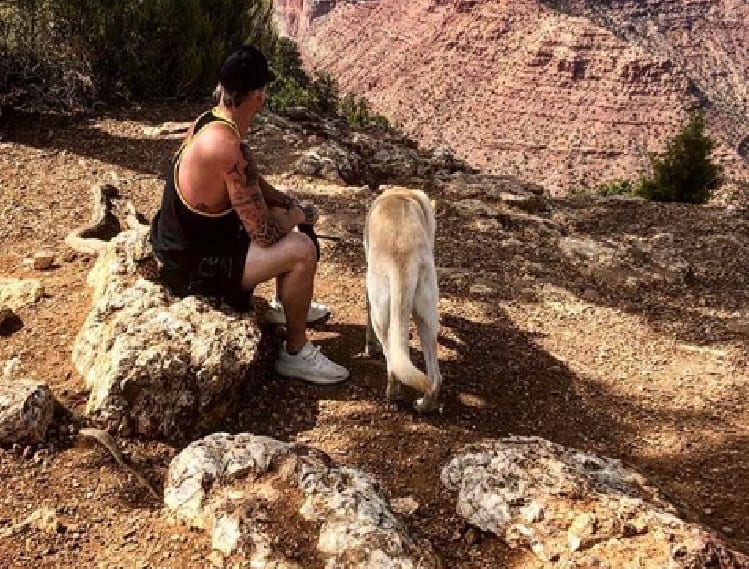 Enzo Amore might not be a WWE Superstar anymore, but he still has plenty of fans who still believe he’s the Realest Guy In The Room. He recently lost his dog Frank who was an English Bulldog and he wasn’t very old either — just about 2 years old. It’s always awful to lose a dog, but especially when you thought you had so much more time with them.

But Enzo isn’t sitting around because he and his dog Kilo are taking off for a long road trip but they also brought Frank along as well.

Amore sent out an Instagram message to let fans know what he is up to in a pretty lengthy, but an impactful message:

“Yesterday I said goodbye to Hollywood, (I’ll be back,) and I hit the road with my best friends, Kilo & Frank, simply to ask the question: #HowYouDoinAmerica ?????? Destination?!?? Ya boy Zo is en route of my new home: New York F’n City! I’ll be posting to my #IGtv daily video content, vlogs, & be documenting my experience across #AMERICA! I’ve driven across this country a hundred times, but never in one shot & never with my best friends. I’ll be sprinklin’ a little bit of Frank everywhere I go!! #RIPfrank!! And I’m open for pit stops: bring on the suggestions! I’m currently at the #GrandCanyon & plan to hit #SedonaAZ, #NewMexico, #Texas, #Louisiana (where I’ll be coming out of my retirement… & wrestling again!!!!!! not a human dummy, an alligator! @zzloupe ! Thanks buddy!), I’ll hit #Atlanta, #NorthCarolina where I’ll see @ob [email protected] & Eli the [goat] w/ the @nygiantswhoop up on the @panthers !! From there I’ll do #WashingtonDC, #Philadelphia (where me & Young-Ki will run up the damn steps like the rocky movie,) #JERSEY!!! And finally I’ll finish #HowYouDoinAmerica by hosting the #NewYorkGiants vs @[email protected] on 33rd st in my soon to be new home of Manhattan !!  New York City!! And let’s be clear, I’m a #JerseyBoy but when Frank sang #NewYorkNewYork he wasn’t in New York, he was lookin at it.. but I WANNA BE A PART OF IT!! After all Freedom is just another word for nothing left to lose, and after losing Frank,  I decided to go with my gut & take on a brand new opportunity in New York City. And to ensure that nothing happens to my wolf, I ain’t gunna let him out of my site! I’m on my John Snow [sh*t].. But before I get to the Wall I’ll call home, I gotta find out… #HowYouDoinAmerica ?!?! ?? (use the hashtag #HowYouDoinAmerica to suggest places for me to #PopUp , stop, eat, get a lift in, have a drank, and THANK YOU!! I’ll be as interactive as I can during the experience! I’ve seen & interacted with all of you in every arena this country has to offer, now I wanna see what it looks like outside the arena & I’ll take all the love!!! It’s #ALLlove! Thank you in advance for one helluva a trip!!! #HowYouDoinAmerica?!)”

That was a lot to take in, but it certainly sounds like Real1 has an adventure on his hands. He’s posted several updates so far on his trip which you can check out below. It’s also interesting how he said that he plans on stopping by to do some gator wrestling with Tough Enough alum ZZ. But losing Frank seems to be one of the main reasons for this journey as Enzo Amore puts a lot of miles on his car.