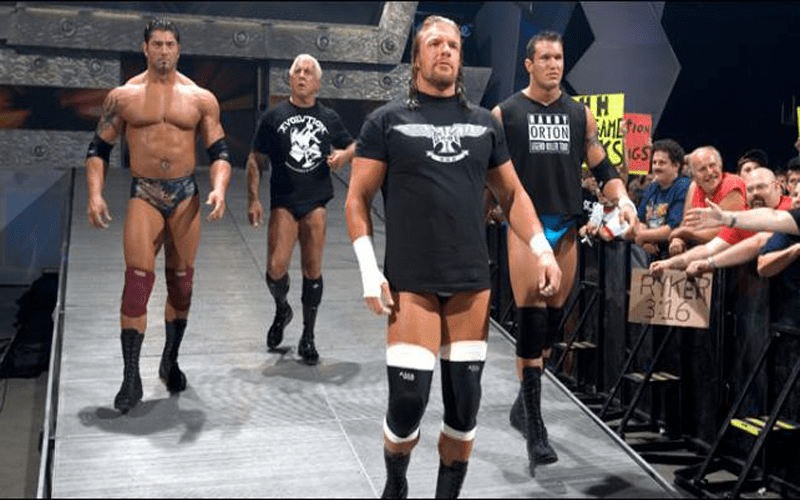 Evolution is undoubtedly one of the most influential and legendary factions of all time. The group- which consisted of Triple H, Batista, Ric Flair, and Randy Orton have made a lasting impression on the fans and the wrestling universe for a very long time.

The faction debuted back on January 20, 2003, and lasted until 2005. They had brief reunions in 2007 and 2014 and were reportedly disbanded back on June 2, 2014. However, judging by the fact they are coming back together in any capacity, it seems the Evolution will never die.

As we previously reported, WWE confirmed that Evolution will be reuniting at the thousandth episode of SmackDown Live. In response to this, the current SmackDown Live Superstar in Orton, and ‘The Game’ have both tweeted out responses. At this time, Flair has only retweeted the announcement and Batista has not been active on social media to say anything.

First, Orton claimed Evolution to be the most dominant faction his employer has ever created.

The most dominant faction created created by @WWE returns in full for a historic night. https://t.co/yYjRopWQcE

On the other hand, Triple H reminded everyone that the group represented the past, the future, and the present in WWE.

A group created to ensure the represent the past, present, and future of @WWE … returns on a historic night. #ThenNowForever #EverythingEvolves #EvolveOrPerish https://t.co/MXT9gpnEBw

The thousandth episode of SmackDown Live will take place in Washington, D.C., on October 16. With a total of 49 World Championship reigns between the four members of the group, the group has a lot of credentials and should make an impact on the show.

What are your favorite memories of Evolution? Which member of the group is your favorite Superstar? Let us know your thoughts, opinions, and reactions below.