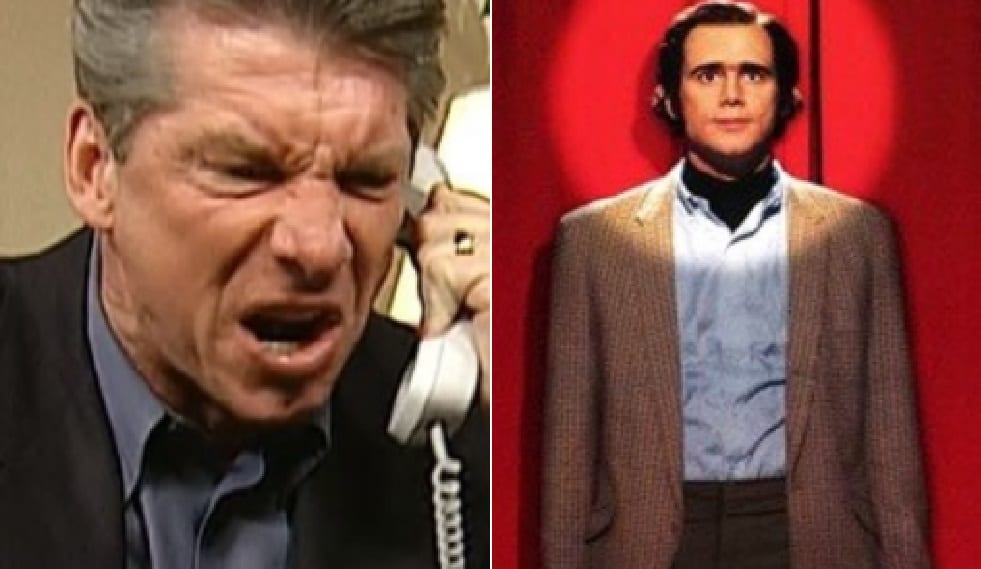 Man On The Moon was a wonderful biopic about Andy Kaufman, but it could have been better. After all, there could have been way more pro wrestling in the film. But it turns out that Vince McMahon was unhappy about the parts of the movie concerning his business anyway, so maybe that was for the best.

Bruce Prichard said on a recent episode of Something To Wrestle With that the Andy Kaufman film could have also included Jimmy Hart who in reality was by Kaufman’s side in just about every instance he was around the pro wrestling business. But according to a Wrestling Observer Newsletter from back in the day, WCW had an issue with Hart being in a movie that also included Jerry Lawler.

It was also said that neither Vince McMahon or Prichard was too happy about the fact this movie was being filmed. The main problem was that they simply weren’t clued in on the fact it was happening in the first place.

“I wasn’t aware that they were going to do this whole thing on the movie set and we got wind of it in Stanford after it had already hit the press. Vince was livid, I was livid not from the angle [becasue] we didn’t know.”

“The should have told us ahead of time so that our PR people would know how to react to it and our PR could have helped to get it out. But we didn’t know and Jim Ross was out there so it was a little bit of a sticking point with the PR people and Vince that we got caught with our pants down a little bit.”

If you remember back that long ago, WWE strangely didn’t plug the movie much except for a few mentions and whatever Jerry Lawler would say. This might have been a reason because WWE wasn’t smartened up about what was going on and they usually like to know about that kind of thing.