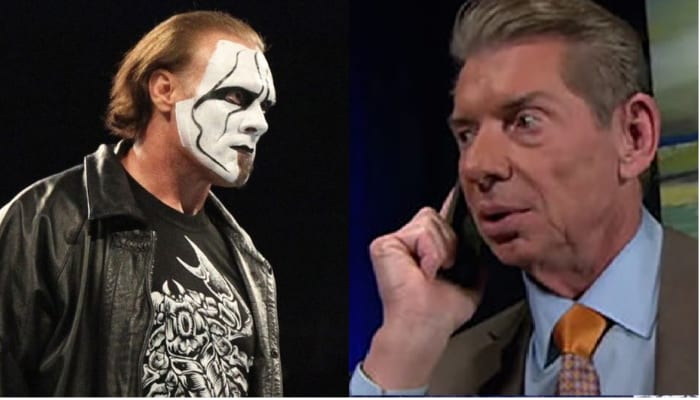 Sting didn’t go right to WWE after WCW folded. In fact, he spent another decade working for WWE’s competition at TNA. But this didn’t happen without Vince McMahon apparently trying his best to stop it from going down.

The WWE Hall Of Famer, Sting appeared on Apter Chat recently where he discussed a conversation he had with Vince McMahon when The Chairman Of The Board was trying to convince The Stinger not to sign with another competitive company.

“I’ll never forget that conversation I had with Vince. He’s on the phone with me and he says: ‘You know Sting, I find this hard to believe. The legacy that you leave behind and the thought of you going to TNA… it just bleh!”

“So you fast forward to you know coming back to do WrestleMania I had set out a text to Vince and Triple H that just said, ‘have you guys turned the page on Sting yet?’ And I honestly did know? Did they turn the page? Are they done? Or would they consider a run up there?”

Sting did eventually make his way to WWE but he didn’t have a very long career. Although he concluded his time with WWE after such a short time he was still inducted into the WWE Hall Of Fame. But it’s anyone’s guess about all of the great angles we never saw with Sting in WWE because he decided to go to TNA instead.