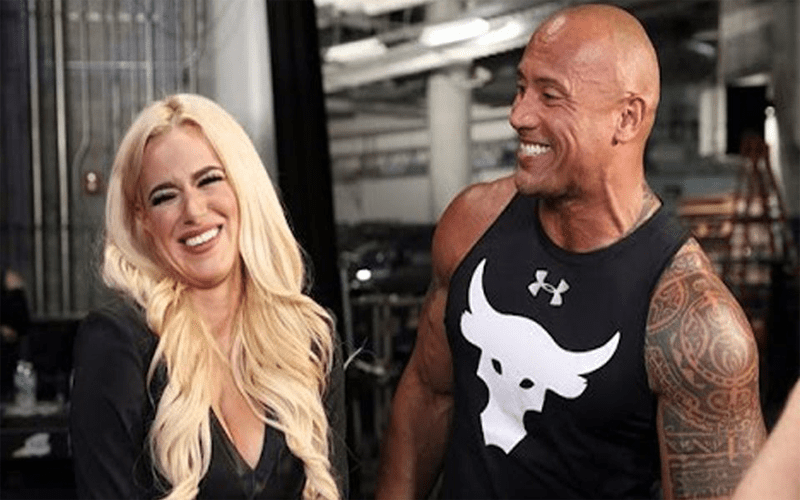 Lana is embroiled in a storyline alongside Rusev against Aiden English on SmackDown Live after English betrayed the team last week. On SmackDown Live this week, English teased that Lana had been involved in some immoral act in Milwaukee.

This has led many fans to believe English is making reference to an incident from The Rock from back in 2016 when ‘The Brahma Bull’ made his return to WWE. While appearing for the Domenick Nati Show, Lana claimed these were nothing but rumors and in 2018, people shouldn’t slut-shame women by coming to those conclusions.

“A lot of this stuff online and people questioning about The Rock… This is 2018, why do we go to that immediately? I know we love a good scandal and we love the gossip, but when all of this comes out, there’s going to be no proof. I’m going to be having the last laugh.”

“This should be a lesson to everyone it’s not okay to be slut-shaming people or to be saying these types of things towards women with the #MeToo movement and #TimesUp. We’re all past that and I hope that people will learn that it’s not okay to say or assume certain things.”

To clarify, Lana clarifies that the rumors are indeed just that- nothing more.

To conclude the interview, Lana says that WWE Chairman Vince McMahon has 100% control over everything that happens. She likens her employer to a director.

“I would say it’s 100 percent up to Vince McMahon. He is our director and we’re kind of a canvas. We have to make it our own but Vince McMahon is the director of the TV show. It’s our jobs to bring what they want us to do to life. It’s a collaboration with creative but at the end of the day, he has final say.”

What do you think happened in Milwaukee? Do you have any theories? Let us know your thoughts, opinions, and reactions in those comments below.