X-Pac opens today’s show by speaking about the passing of his wife of many years, and the mother of his children. He points out that Terry lost her battle with mental illness and addiction, adding that she was dealing with a lot of pain even when he first met her. He says he loves her and then takes a commercial break before discussing the wrestling news.

X-Pac comments on Brie Bella’s accidental kick to Liv Morgan on RAW this week. He says “shit happens”, but notes that this is a good opportunity to train the referees on what to do in these situations, and those talks are probably happening internally in WWE right now in his opinion. 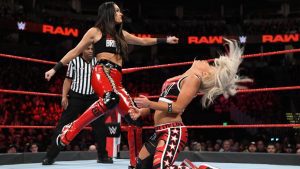 Liv managed to kick out at two when Brie covered her, but X-Pac points out that someone on Liv’s team should have been in there making the save regardless. He notes that talents seem hesitant to go against the script or to react on the fly nowadays, which is too bad.

It was announced recently that Abyss will be the next inductee into the Impact Wrestling Hall of Fame. X-Pac thinks this was a great decision, adding that Abyss has been a flag bearer for that company for years. He also points out that Abyss’ work as Joseph Park has been tremendous as well.