Luke Gallows and Karl Anderson have really buckled down and gotten in incredible shape since coming to WWE. They looked good before, but they’re ripped now.

But during Gallows’ first run in WWE as Festus, he didn’t have the same look at all. In fact, some would call his physique doughey. That is not the case now though and Luke Gallows is an absolute monster and in the best shape of his life. It’s just too bad he and Anderson don’t get the screen time they used to.

But when one fan tweeted a picture of their WWE playing card featuring Luke Gallows’ former WWE persona, he didn’t recognize himself at all.

“Who is that?” the Good Brother replied.

Only time will tell if Anderson and Gallows will get back in the swing of things and become involved in another major storyline in WWE before their contracts come to an end, but he will be in amazing shape whenever that day comes.

If you’d like a side-by-side comparison, we’ve put one together for you below. 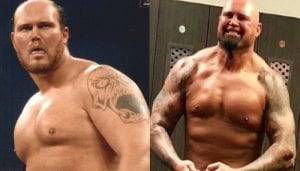