WWE SmackDown Live Superstar Kofi Kingston has been employed by the company since late 2006 when he signed a developmental contract with the company. Since that time, the Superstar has become one of the most tenured performers currently employed by WWE.

It was revealed today that Kingston has now surpassed Billy Gunn as the Superstar with the most total days as a Tag Team champion in WWE. As WWE themselves revealed via their @WWEIndia account on social media, Kingston as of today has a total of 954 days as Champion.

The graphic below showcases this: 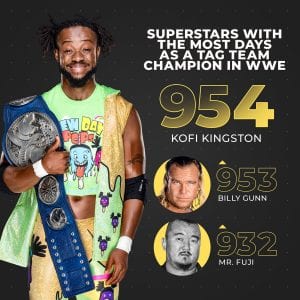 Do you think anybody on the current roster has the ability to surpass Kingston? Do you want to see Kingston surpassed? Let us know your thoughts, opinions, and reactions in those comments below.