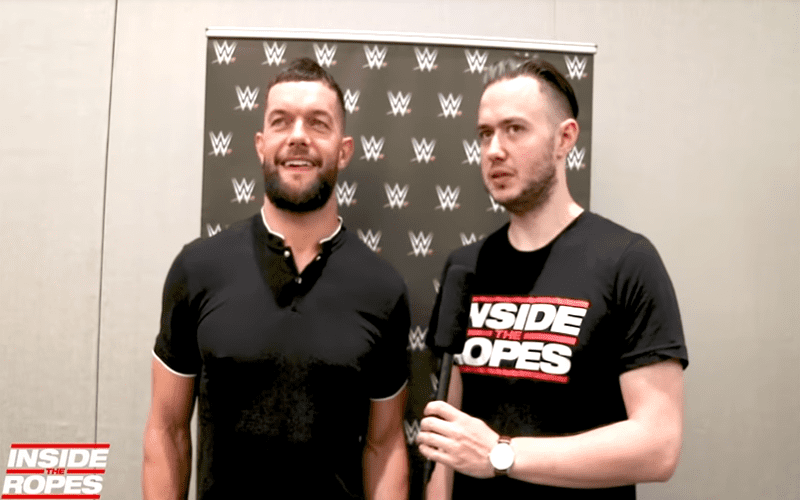 RAW Superstar Finn Balor is beloved throughout the wrestling community. As such, he was recently chosen as a guest for Inside The Ropes with Kenny McIntosh. During the lengthy interview, Balor discusses everything from cheat meals and his dream job to his WrestleMania 34 bout against The Miz and Seth Rollins and a potential match with former Universal Champion Brock Lesnar.

The first topic of conversation was the WrestleMania 34 opening match. This match was for the Intercontinental Championship and featured Balor, Rollins, and The Miz. The match is still loved today, months later.

“People were surprised, I think, that it was good- which I was a little bit offended by considering the fact that I’ve pretty much made a career in triple threat matches. You know, if you go back to Wrestle Kingdom back in Japan- with Ibushi and Low Ki. Basically, I’ve made a living off of triple threat matches.

“No, honestly- being in the ring at WrestleMania making my WrestleMania debut with two guys that I really respect- Seth is probably one of the best in the business and Miz is probably the most underrated in the business, perhaps. I have the utmost respect for the both of them. [It was a] great night, and an even better after party.”

Balor was asked what he would aim to be if he wasn’t a WWE Superstar. The RAW Superstar took this opportunity to actually surprise McIntosh by saying he already has an idea in mind and plans to do it. The leader of the Balor Club wants to climb Mt. Everest and film it as a reality TV series.

“I know exactly what I wanna do. You’re gonna think I’m crazy. This is a message going out there to any TV producers that are willing to follow me and my ambitious task of climbing Mt. Everest as a reality TV show. That’s what I wanna do. I’m putting it out there in the universe. I’m gonna do it anyway so if you wanna do it with me, I think it could be really good TV. The universe is the mountain.”

A lot of Superstars often comment on what their cheat meals are. For many, meals such as pizza, ice cream and tacos are the generic response. Balor, though, doesn’t appear to want any of that.

“Sushi, man. I love sushi. I know sushi is very clean; very healthy. But for me, it’s heavy in carbs so I try not to eat it too often, but that is one thing that I absolutely love. Soup- I love soup. I went to Iceland for four days, right? The country of Iceland- the incredibly beautiful, picturesque, scenic country of Iceland with amazing people has some of the most incredible food I’ve ever had in my life. I guess it gets so cold there that everywhere sells soup to warm you up when you get in. The soups, man…they were beautiful. I’m a big fan of soup.”

The former NXT Champion has said numerous times he would like to face Lesnar in what many fans call a dream match. Given the uncertainty of Lesnar in WWE, Balor provided an update and explained why the match means so much to him. He also gave an insight into the aura the current Universal Champion in Roman Reigns provides when he walks to the ring.

“Well, I don’t make that decision. I’m just very low on the totem pole with regards to who makes the matches. But obviously, I would love that Brock Lesnar match more than anyone. I think it’s the classic David vs. Goliath match. I don’t think it’s very much like a match I’ve had before…or he has had before, maybe? You know, someone who had a very brief crossing of the paths with in New Japan. When I was in Japan as a young boy, he was in Japan as a Champion. He was the New Japan Champion. And do you know what he did? He walked out on the company and destroyed the reputation of the title belt. He’s kinda doing the same thing again now. Honestly, when Brock’s music hits, everyone pays attention. Despite all this talk about ‘he’s not there every week,’ ‘he’s not the best.’ I know that when his music hits and he walks out, I’m invested and I’m intrigued to see what is gonna happen. There is certainly an aura that Brock carries that nobody else carries. That’s the title aura that I want to be in the ring with and I wanna feel and experience it].

“When I first came up [through] the WWE, we had- I wrestled Roman, obviously on RAW. Beat him on my first night, no big deal. But a couple weeks later we did it at the No Mercy PPV, was it? No, the Extreme Rules PPV. It was a five-way. It was like me, Samoa Joe, somebody else, somebody else- and Roman. Everyone came to the ring and then Roman’s music hit and I’m not kidding, it was the most insane reaction I’ve ever experienced in my life. That type of reaction is the type of thing that I want to be involved in. That feeling that Brock gives you when he walks to the ring, and that aura that Roman has when he walks to the ring. They are the type of moments that this business is built on.”

Finally, Balor addresses the idea of the Demon appearing again.

“I hope so. I hope someday. I feel like the direction of Finn and the Balor Club have gone in the last few months has been really positive. I think getting away from the Demon has been cool. It’s definitely helped me as a person and as a performer. Kinda put more stock back in Finn and not be so reliant on the Demon. I’m all for the direction that we’re going right now.”

You can alternatively watch the video of the interview below:

Do you want to see Balor vs. Lesnar? Would you watch the reality TV show Balor suggested? Let us know your thoughts, opinions, and reactions below.