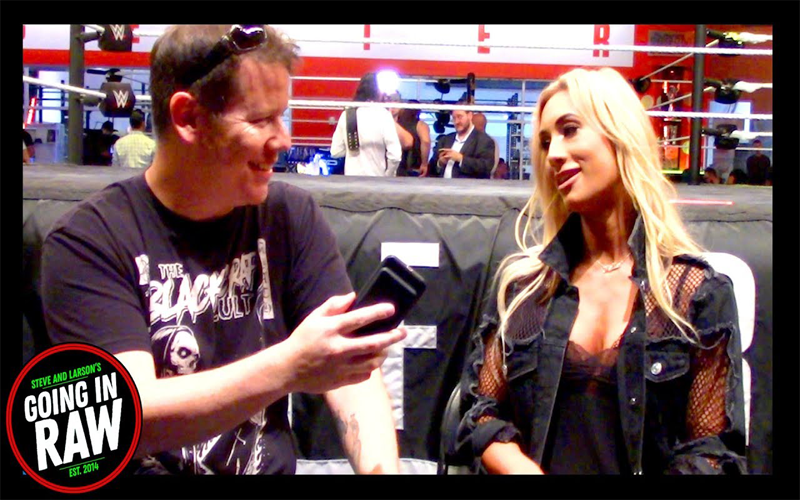 To begin with, Carmella was asked to explain how she felt being at the top of the food chain on SmackDown Live as Women’s Champion for a total of 131 days.

“It was so cool. It still feels cool. I mean, I love where my career is at right now. I wouldn’t change it for anything. It’s just like- a little bit of a [jab] at everyone who doubted me and hated me. I just proved everyone wrong and it’s been really cool, especially being here in the Performance Center and knowing what my mindset was like when I was here and what I wanted to do with my career. To know that I’ve far extended my own expectations is really cool.”

During her time on NXT, Carmella worked moreso as a manager for Big Cass and Enzo Amore as opposed to an in-ring competitor, though “The Princess of Staten Island” did have some notable bouts in the developmental brand. Since coming to the main roster, she has been featured heavily on SmackDown programming. Carmella explained to Steve what the main differences between her time in NXT and on the main roster have been.

“Well for me, there are so many differences. I never even wrestled on a live show when I was here in NXT. I never wrestled at a TakeOver or anything like that. So for me, my very first live match on television was SmackDown and a match against Natalya. So much was just thrown at you and it was just so overwhelming. So yeah, I think the biggest difference is learning to go on the fly. We only have two hours. Here you can kinda make a mistake and they’ll fix it but there’s nothing like live television.”

Finally, Carmella addressed her love of sneakers. She was asked to talk about the culture, and her decision to wear so many variations of sneakers instead of a specific type.

“I’m not going to go so far as to say I’m a full-on sneakerhead, but I have definitely learned about the culture a little bit. When I first started here in NXT, I used to wrestle in boots ’cause I just thought ‘I’m a wrestler, I need to wrestle in boots!’ Then I just thought like I wasn’t being authentic to my true self. I was a dancer my whole life, so once I started switching over to sneakers I was like- I bought my first pair of Air Force 1’s. I was like ‘you know what? I’m going to wrestle in sneakers. It makes me feel more like myself.’ I was just like ‘no, this is dope!’ Like I just felt cool, I felt- I just came into my own. It just snowballed from there. Now I don’t even really know how many sneakers I have.”

If you’re interested, you can watch the video itself below:

Did you see Carmella as being successful during her time back in NXT? Were you a fan of her reign as SmackDown Women’s Champion? Let us know your thoughts, opinions, and reactions in the comments below.