X-Pac opens today’s show by speaking about the recent PWG BOLA event. He points out that guys like Bandido saw an opportunity and took it, making a lot of money in the process. He congratulates Bandido for that because the performers who are working for CMLL or Triple A exclusively are getting “f***ed” in his opinion. He informs that those companies book the talent out and take half the money which he calls “insane” and “highway robbery”.

Speaking about last weekend’s Hell In A Cell PPV, X-Pac says that the Becky Lynch and Charlotte match was his favourite part of the show. He thought Lynch’s win provided the biggest and longest pop of the night, and the match had sustained heat from beginning to end. He points out that nobody would have seen this creative direction coming for Lynch a few months ago, but he’s glad WWE pulled the trigger on it. He thinks if WWE starts to book Lynch like a babyface at this point it’ll screw up the natural momentum that she’s gained. 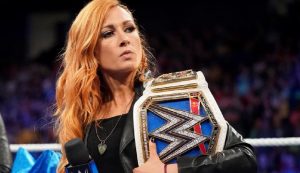 He thought the tag match between Seth Rollins/Dean Ambrose & Drew McIntyre/Dolph Ziggler was great. It was great the entire way through but in the last five minutes they blew it out of the water. He noticed that Renee Young was very complimentary of The Shield and Ambrose in particular throughout this match, but he thinks she’s been doing great since becoming a full time member of the RAW commentary booth.

X-Pac notes that Matt Hardy has been signalling a retirement of sorts for a while now, but he thinks Hardy will be back around the business in some capacity at some point in the future. He notes that when you get to a certain point in your career you get to decide how much WWE owns you, because they certainly don’t own someone like Brock Lesnar. Maybe Hardy will be able to negotiate a reduced schedule or something of that nature moving forward.