Ross opens today’s show by congratulating Ric Flair on his recent marriage. He notes that Flair’s wife, Wendy, has legitimately saved his life. Ross has never seen Flair this happy, and during Flair’s recent health scares Wendy was there for every single minute of it. It’s great to see The Nature Boy so happy, and Ross wishes both of them the best moving forward.

Ross also congratulates Mick Foley and WWE on the fantastic “20 Years of Hell” WWE Network special. He thanks Foley for speaking truthfully about the events surrounding the Hell in A Cell match in 1998, as well as the events that brought Foley into the company in 1996. Ross says he always believed in Mick Foley, and that’s still the case today. 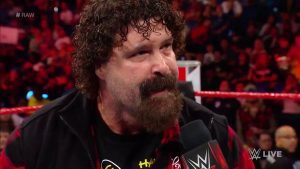 Ross says he enjoyed last weekend’s Hell In A Cell PPV, but he wasn’t particularly fond of the way the finish of the main event was booked. He wouldn’t have booked the finish of the match like that because he thought there was a lot going on with a lot of moving pieces, and we still didn’t get a legitimate finish to the match.

He thought The Undertaker’s promo was the highlight of RAW last week and he thinks the build to Undertaker’s match with Triple H in Australia has been great. Ross also says that Lio Rush looks to have something special, noting that he has everything necessary to be a keeper for WWE. He thinks it was a great idea to pair Rush with Bobby Lashley.