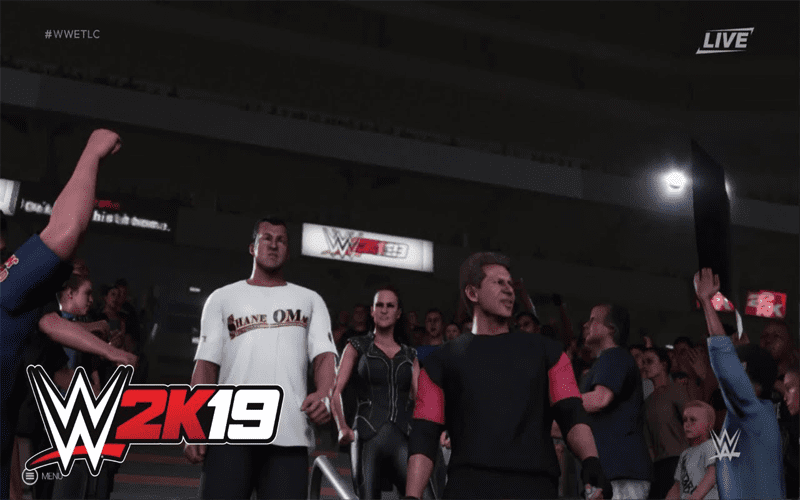 2K Games unleashed the floodgates today as they allowed certain content creators to access the upcoming WWE 2K19 video game. With footage now live across YouTube, we have compiled a vast array of information here for you. However, if you are looking to see the full list of ratings or the MyCareer trailer, we have articles up individually on those.

First up, the default Champions in the game are:

The list of Superstars who act solely as managers:

2K19 features a new menu vastly different to WWE 2K18. The design appears simplistic with few colors. The Superstars represented on each sub-menu appear to be fading in a similar fashion to the Avengers meme that became popular this year. In the video below, Delzinski goes through them.

IGN goes into detail about 5 new weird features added to the game. This includes several filters to play your game in such as 8-bit and comic book style. Also mentioned is the “Monster” Triple H, the big head mode and a character named Blocky who can be customized in a similar way to a Minecraft character.

If you’re still itching for more details on MyCareer, Pulse goes into detail in an hour-long video showcasing the beginning of the mode, including the customization options.

Delzinski visits all menus available in Universe Mode, which has some distinct changes this year.

Macho T has a video showcasing every new Superstar’s entrance. Keep in mind their are supposedly additional individual Money in the Bank entrances for most people on the roster, but these are not showcased.

The video portion of the creation suite is showcased in depth through a video posted by Delzinski. It showcases the various cutscenes available in the Create A Video menu and provides details on the Highlight Reel.

If you would like to observe all the new moves and animations 2K have placed into this game, Pulse has a video showcasing all 200+ of them.

Delzinski goes through the various Championships on offer in the game. Besides the addition of the NXT North American Championship, not much has changed here.

One new feature of the game is known as “Payback.” Macho T explains how the new feature works- which could be likened to the Comebacks that have featured in past WWE games. These also seem to still be in the game, so they aren’t just renamed. Additionally, Macho goes through all the tag teams and abilities.

Another massive feature of the games this year is the 2K Towers mode, which anybody familiar with the AJ Styles 1 Million Dollar Challenge should know. Pulse takes a look at the gameplay.

He also showcases off a Mexican arena in a match between “Monster” Triple H and King Booker.

There are also a plethora of new features added to the Hell in a Cell match type. This includes ways to escape and further increases the realism associated with the real structure. 5-person match-ups are also confirmed, which is new to the franchise.

If you’re interested in watching various regular and big head entrances and matches the following content creators will be uploading footage today and up until the game’s release:

If we have missed any, please visit the comments to add any names for other fans wanting to view the footage ahead of the game’s release.

Again, the game will be released on Windows, Xbox One and PlayStation 4 on October 9. If you purchase a special edition of the game, you can play four days early. There is no Nintendo Switch version this year.

What are you most excited about in this game? Will you be purchasing it? Let us know in those comments below. Don’t forget to leave a reaction.