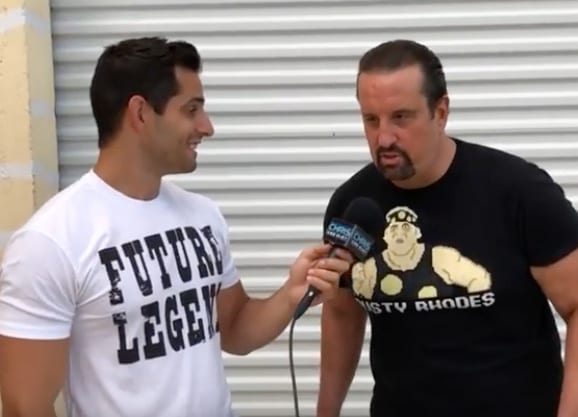 ECW legend Tommy Dreamer has revealed a great moment from the All In event.

Dreamer, who runs House of Hardcore and continues to play a prominent role in the world of professional wrestling, walked Cody Rhodes to the ring for his NWA Worlds Heavyweight Championship match against Nick Aldis at the show alongside Glacier, Brandi Rhodes and Diamond Dallas Page.

Alas, there was one more individual who was spotted near the ring on that night – Cody’s dog, Pharaoh. While the whole thing may have seemed a little bit silly to some, Dreamer actually revealed a really cool moment that happened that night during an interview with Chris Van Vliet.

I’m a dog lover, and I was handling Pharaoh. We started to go, and all of a sudden I see his hair raise and he starts to crouch. You know, we’re dealing with an animal, even though he’s a domesticated animal and he’s the nicest dog, you never know. He runs up the steps and he’s pulling me, and he’s almost like in attack mode, and I’m like what’s going on?

I turned around and Cody & Nick just start standing next to each other, and the building started shaking. Pharaoh felt that, and you know how they say dogs have different senses, it was almost like he sensed an earthquake happen before it actually happened. It was awesome. He knew. That’s why he’s the next big star in this business!

While Pharaoh did attempt to steal the show, there’s no doubting that without Cody Rhodes, and arguably Tommy Dreamer courtesy of his work during the Battle Royal, that show wouldn’t have been anywhere near as successful.

We can only hope that they continue to build on this momentum they’ve created for themselves, potentially with a follow up event next year.