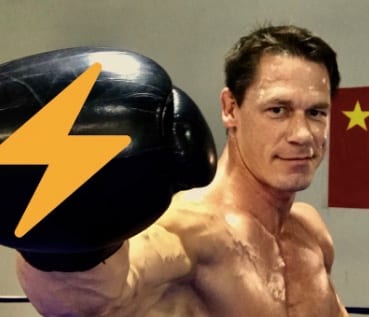 WWE superstar John Cena has revealed his incredible physique on social media, as he prepares to return to the ring at WWE Super Show-Down.

Cena, 41, is set to appear at the Melbourne extravaganza on October 6th. The 16-time world champion has only made sporadic appearances on WWE television over the course of the last few months, ever since he was defeated by The Undertaker at WrestleMania 34. Now, however, he seems to be in the best shape of his life.

Big Match John will be teaming up with Bobby Lashley to take on the team of Elias and Kevin Owens, in front of a possible attendance of up to 100,000 fans.

In the above post, Cena also hinted at using his new Lightning Fist move once again, which he debuted during WWE’s recent show in Shanghai. John has been gradually moving into a part time role for a long time now, courtesy of his increasing presence in the world of Hollywood.

This is something that the man himself criticised The Rock for, but as we now know, the two men are on great terms behind the scenes.

In regards to his Super Show-Down appearance, a lot of fans were hoping that the initial announcement of him facing Kevin Owens would come to fruition, as opposed to the tag team match that we’re now stuck with. Either way, it’s hard to stay mad at him, especially when you can see just how hard he’s working in order to stay at the top of his game.