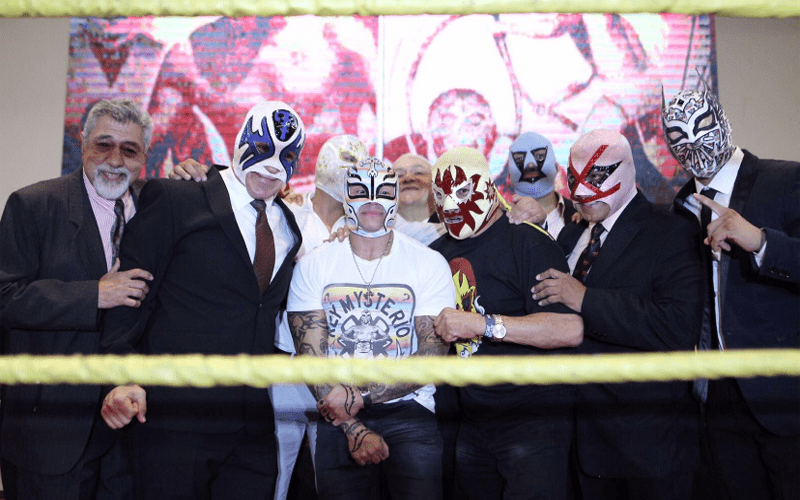 WWE SmackDown Live Superstar Sin Cara is currently taking time off while he rehabilitates an injury that put an abrupt ending to his storyline with Zelina Vega and Andrade “Cien” Almas recently. However, the luchador doesn’t appear to be laying low during his break from in-ring competition.

Cara was one of the confirmed guests for the Lucha Libre Museum Expo. Many other notable luchadors were in attendance, such as Rey Mysterio, Mil Mascaras, Blue Panther Jr. and Ultimo Guerrero.

Specifically, as it pertains to Cara, he has an autograph signing scheduled for midday tomorrow. Mysterio, on the other hand, had his autograph signing at around 3 PM yesterday. Amongst all the chaos that the expo brings, the two friends were able to catch up and take some photos together.

Cara compiled an album of photos in a tweet that we will showcase below:

The English translation of the tweet roughly reads the following:

“Moments like yesterday I will never forget.? Inauguration of the @expomuseoLL WTC. We wait for them today and tomorrow to continue to live the history of the Mexican wrestling.????? #ExpoMuseoLuchaLibre.”

We previously reported that Mysterio is under contract negotiations with WWE and there is some expectation that he signs, though this isn’t a done deal yet.

Have you ever met Cara or Mysterio? Which Mysterio dream matches are you looking forward to if he signs with WWE? Let us know in the comments below.