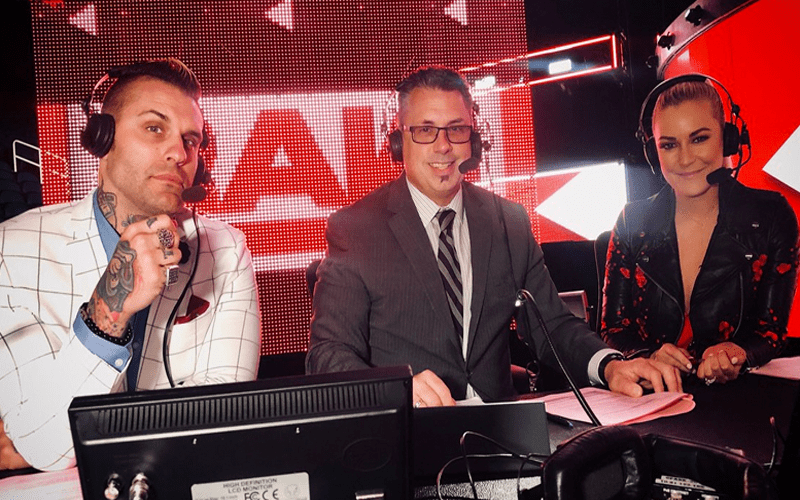 Renee Young is making headlines around the world as she takes her full-time place on the RAW commentary team alongside Corey Graves and Michael Cole. Ahead of her main roster PPV debut as a commentator, Young spoke to Newsweek on her transition from the pre-show panel to working commentary.

Young first commented on the various reactions she has received since taking over for Jonathan Coachman on commentary.

“I can’t believe how cool and supportive they’ve been, from my family, my peers and the WWE Universe. Everyone’s been really great. Of course, there are going to be people who are going to have different opinions to that and I’m hoping over time I can prove them wrong. Hearing from JBL, he gave me some great advice. To stay off social media, do my own thing, listen to Cole, listen to Vince, Kevin Dunn. Hearing from him, getting notes from Dino Curlander or Booker T. It’s so funny to me that these guys I grew up watching are giving me nuggets and advice. It blows my mind.”

Now specifically talking about the Hell in a Cell PPV, Young reveals how she is preparing differently.

“I talked to Michael Cole a little bit about it last week. I’m still figuring out how I prepared to do commentary, which is different than how I would prepare for a Kickoff panel which I have down to a science. With commentary, it’s so different because you want to be prepared with information on the guys and girls and some of the stories I want to tell. But I also want to react to what I’m seeing. I haven’t got my preparing down to an art just yet.

“I talked to Cole about it and he told me to go back, watch some old Hell in a Cells. Just watching any PPV to hear how the commentary is different, how your remarks are going to be different. Another person who has been great is Nick Joseph. He’s a total wrestling nerd and a commentary nerd so he actually has great points like “during the entrances, you want to have this and this put together.” “For pay-per-views you get to tell this story.” He’s been really great with that.”

Young comments on whether she could see herself doing play-by-play.

“[Laughs] I don’t think so. And it’s funny because I feel like so many people have asked me that even before this opportunity. “You should do play-by-play” and I don’t think I can do that!

“Michael Cole is so seamless and good at what he does and being able to sit next to him and observe the way his mind works, how he compartmentalizes and have things down to a tee. I like that. Doing the pay-per-view kickoff panels is a little bit more like play-by-play because you’re getting us in and out of segments and throwing it to graphics and video packages. That was something I was familiar with, but going out there and straight calling Fujiwara armbars, I don’t know if that’s in my wheelhouse. I think I’ll stay in my lane doing color commentary for now. But we’ll see! I never thought I’d be doing Monday Night RAW so who can say?”

Finally, Young reveals why she has such great chemistry with both Cole and Graves on commentary.

“Corey Graves is one of my best friends in the whole world. We’ve been friends since we met at NXT. We’ve been on a bit of a journey together, from him stepping down from wrestling to doing the panels on NXT with me. I can remember that day when he told me that he would no longer be wrestling and will be joining me on the panels. That was such an emotional day for him, and for anyone who has been passionate about something and having to step away. So we’re good friends.

“And Michael Cole, from the day that I started in WWE I used to travel with Cole and JBL. They really were my introductions to the WWE. They showed me how life in WWE worked, life on the road, and he’s been such a great champion of me from the beginning. And now I get to share this moment with him and Graves, and it means the world to me and it feels very comfortable. We all understand each other, we know what makes each other tick, what to say to make each other laugh or annoy each other to get the right conversation started on commentary. So I can’t wait to see how it develops further. We’ve only done it three times so I think the more we get into a groove and I’m so new and unfamiliar with everything so I’m leaning on Cole and Graves pretty heavily to make sure I’m doing everything right. But once those kinks are out of the way I can’t wait to see where our story goes.”

Are you excited for Hell in a Cell? How do you think Young is doing at commentary so far? Let us know your thoughts, opinions, and reactions in the comments below.