Lawler informs that he had a tremendous time at Starrcast a couple of weeks ago. He thought the event totally exceeded expectations and he tips his cap to everyone involved. In his opinion, the event rivaled WrestleMania Axxess. He points out that he was initially supposed to do a panel with Terry Funk but Funk had to have surgery and couldn’t make it to the event. 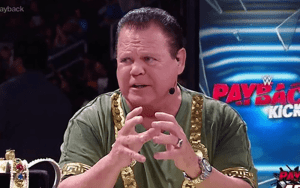 Although his panel with Terry Funk didn’t take place, Lawler still did an autograph signing and took photos with some fans. He also was asked to be a part of the roast of Bruce Prichard along with several other wrestling veterans like Jeff Jarrett, Madusa, Eric Bischoff and more. He informs that this was a really fun event and he was happy to be a part of it.

Lawler flew home from Starrcast and immediately hit the road for indie show bookings. Lawler informs that he was supposed to wrestle last night at an event featuring Buff Bagwell, Ken Shamrock and more. Unfortunately, the Kentucky Athletic commission wouldn’t let him wrestle because he didn’t go through the trouble of getting a specific physical as well as a $100 wrestling license. He was able to be a part of a promo segment, but he couldn’t be touched in the ring which he thought was very stupid.