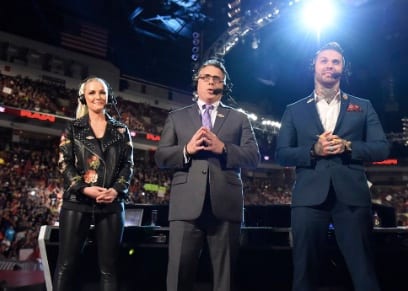 WWE’s Stephanie McMahon has prasied Renee Young after it was announced that she will be joining the Monday Night Raw commentary team on a full time basis.

Young has been filling in for Team Red at the desk, and now, she’ll be a part of the action on a week to week basis. This marks the first time ever that a female commentator will serve as a full time member of the team, alongside Corey Graves and Michael Cole.

Stephanie has been the unofficial ‘head’ of the women’s evolution in WWE, with many of the announcements regarding the movement being announced by her in the last few years.

I am so proud of @ReneeYoungWWE for becoming the first ever female commentator on #RAW! #YouDeserveIt! I can’t wait to hear her perspective every Monday Night! #Evolution pic.twitter.com/KAkxAvSPVm

That’s not exactly something that has gone down well with some members of the WWE Universe, who believe that Stephanie has been forced on us as the ‘voice of reason’ so to speak. Still, regardless of how you feel this moment isn’t about her, and instead, it’s about the fact that Renee has been able to accomplish something that few would’ve thought possible just a few short years ago.

As a direct result, Jonathan Coachman will be moved to the position of host for the pay-per-view kick off shows. Since returning to WWE, Coach has certainly been a polarising figure with some loving his work and others hating it.

In terms of Renee and Stephanie, though, it’s great to see that there’s a strong relationship there even if you believe that it’s manufactured, and it seems as if commentary on Monday nights is in safe hands.