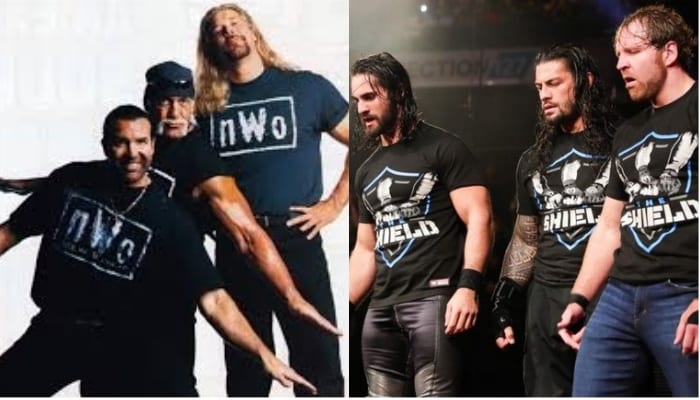 Hulk Hogan, Kevin Nash, and Scott Hall seem to be getting the nWo band back together for a new tour and in the process, a dream match was sent their way and Hogan said they would smash them.

Because when Hulk Hogan was asked how the nWo would fare against The Shield, The Hulkster didn’t seem to think Roman Reigns, Seth Rollins, or Deam Ambrose would be much of an issue. Hogan said it’s been 20 years and people are still talking about the nWo which is why they’re making the upcoming appearances because they haven’t been able to do an nWo reunion the way they would have liked.

When asked how the nWo would do against The Shield, Hogan was more than confident that their experience would see them winning in the end.

“We would murder the bums, brother! We would kill em!”

It doesn’t seem like WWE will be booking a match with Reigns, Rollins, and Ambrose vs Hogan, Hall, and Nash for obvious reasons. One of them would certainly be the fact that Kevin Nash’s knee might explode on the way to the ring. But one thing is for sure, Hogan is certainly confident in his crew’s abilities even at this point which is good.