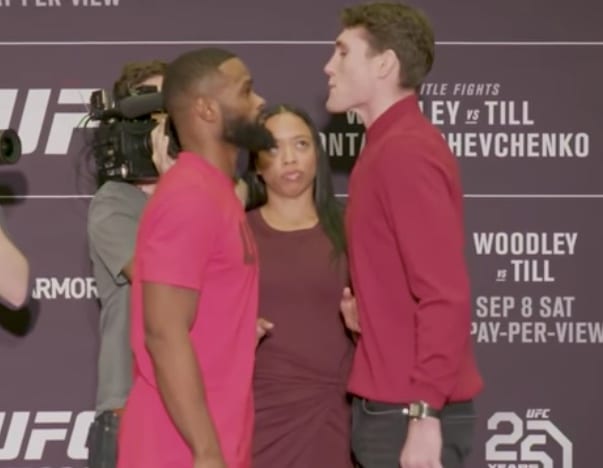 As seen on Sky Bet, Tyron Woodley is now the betting underdog for his fight against Darren Till at UFC 228 this weekend.

The 36-year-old will defend his UFC Welterweight Championship against the Liverpudlian in Dallas on Saturday night, and for the third time in his last four fights, he will head into the contest as the underdog with bookmakers.

Till is currently the 8/11 favourite with Tyron being priced at 11/10, as he attempts to retain his championship for the fourth time since winning it from Robbie Lawler at UFC 201.

The primary concern for many fans is that Till, who missed weight for his last fight against Stephen ‘Wonderboy’ Thompson, will also fail to hit the 170-mark necessary for a title fight.

The unbeaten fighter is clearly fed up with having to answer questions about this, although it’s a legitimate concern when you think back to just how disturbing the footage was of him during his last weight cut. When it comes to Woodley, though, he seems to relish being put in these kinds of positions, as he continues to try and prove that he’s the greatest welterweight to ever step foot inside the octagon.

The event on Saturday will serve as the culmination of Till’s rise to prominence in the division, as one way or another, it seems as if his days at 170 could be coming to an end. Woodley, on the other hand, has plenty of other projects outside of fighting and could have even more leverage over the UFC if he manages to retain the strap.