On today’s show, Jericho will be joined by his partner in crime, Jack Slade, to discuss his surprise appearance at ALL IN as well as the events that preceded and followed that event.

Jericho informs that he played a show with Fozzy in Little Rock on Friday night, flew to Chicago over night and got there just in time to do his run in at ALL IN. From there he flew right to Kansas City in order to play another Fozzy show, and this journey that he went on has become something of lore on the internet. 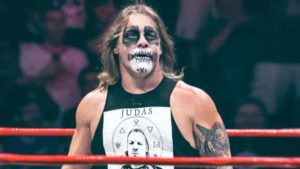 He points out that Cody Rhodes called him about working ALL IN a while ago, but at that time he didn’t really want to work any indie shows in the United States. Since that time his mindset has changed, and when Rhodes called again he was more open to playing a role at ALL IN.

They threw around a few ideas, such as him interfering in the main event and attacking Ibushi, but they couldn’t settle on anything and Jericho lost his interest again. When Rhodes called a third time they came up with the idea for Jericho to do a run in earlier in the show, where he’d attack Kenny Omega.