Ryback opens today’s show by saying he’s extremely happy for everyone involved in the success of ALL IN this past weekend. He notes that it takes a lot of time and sacrifice to do something like that, and he’s sure a lot of people had their fair share of stress during the planning of this event. He points out that it’s also really cool to see three guys set a goal for themselves and then go and crush it. 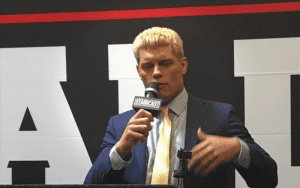 Ryback says that a good professional wrestling show should have a little bit of everything, and Joey Ryan being accompanied to the ring by a bunch of walking penises certainly added a different element to the show. He points out that since this was the first time these guys timed out and produced a show, a few wrinkles were to be expected.

The main event had to be cut down in order to end the show on time and Ryback thinks that’s unfortunate because those guys deserved the time to tell a great story in the main event match. Nonetheless, it was a job well done by everyone to react on the fly in order to make sure they hit their mark.