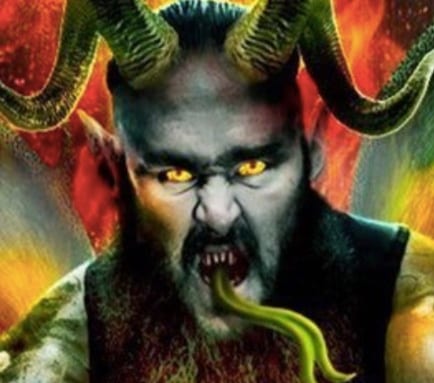 The poster for WWE Hell in a Cell has been leaked and it’s safe to say that it’s unlike anything we’ve ever seen before.

The event, which will take place in San Antonio, Texas, is set to be headlined by Roman Reigns vs Braun Strowman for the Universal Championship. The bout is scheduled to go down inside the Hell in a Cell structure and will serve as the cash-in match for Strowman’s Money in the Bank contract.

Over the last few weeks they’ve been building towards this encounter on Monday Night Raw, and despite the fact that many fans are excited to see these two square off again, there are very few that will openly stick up for whoever made the following poster.

This might be my new favourite worst WWE poster… #HellInACell pic.twitter.com/oy0HYMMwZf

The idea behind the poster is actually pretty interesting, and we’ve seen it before with CM Punk during a past edition of the HIAC pay-per-view, but the execution hasn’t excited all too many fans.

Braun and Roman appear destined to battle one another until the end of time, but the perceived poor quality of Raw as of late seems to have thrown some people off the idea of this match altogether.

Either way, it’ll be interesting to see how the match plays out, especially when you think about what could happen to Braun’s momentum if he ends up losing. But, for now, all we can do is sit and bask in the glory of what can only be described as one of the most ‘notable’ posters in recent years.