Maverick informs that he’s a “walking rib” and he wants everyone to laugh and have fun all the time. His 205 Live character is the most serious character he’s ever played, and he has no idea what he’s doing. He points out that he loves playing silly characters that make people laugh, and entertaining people in that fashion is where he’s most comfortable.

He says that his first instinct is to entertain, but WWE officials told him to hold himself back for now. He understands that for career longevity, that’s the best move for him at the moment. He notes that he loves the role and he’s taking great pride in being able to put a lot of the 205 Live talents over. 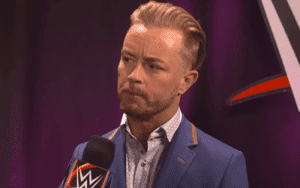 Maverick notes that one issue for 205 Live is the fact that there are no variances between the big competitors and the small competitors. Everyone is roughly the same size, and that makes it difficult to vary match types. Edge jokes that Buddy Murphy looks like he should be on 255 Live, but Maverick adds that Murphy is legitimately 198 lbs.

Maverick informs that Hulk Hogan is one of the main reasons he wanted to become a professional wrestler. He jokes that when he wrestles he even works like Hogan, even though he’s only 5’5”. While Hogan influenced him, he knew that it would be tough for him to accomplish those things in a business where size was king, but when he first saw Rey Mysterio and Spike Dudley he knew there was a chance for him.