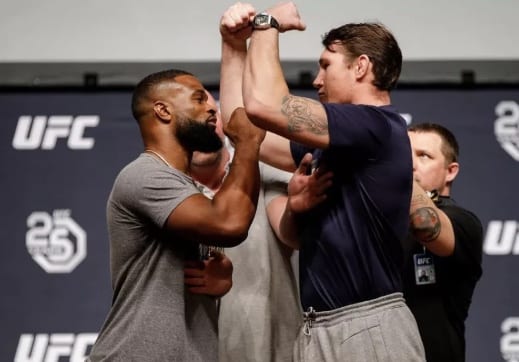 As seen on Sky Bet, the betting odds have changed for Tyron Woodley vs Darren Till which is set to take place at UFC 228 in Dallas, Texas.

While this fight hasn’t been official for as long as the majority of other title fights, it certainly feels like a big moment in the history of the welterweight division. Woodley has reigned supreme at the top since dethroning Robbie Lawler at UFC 201 in July 2016.

According to the odds, however, Woodley is no longer the favourite with both he and Till having odds of 10/11 to walk away as champion.

As we get closer and closer to the fight this Saturday it feels like Darren is starting to gain even more momentum, as he aims to become just the second Englishman to win UFC gold after Michael Bisping. He’s been viewed as a rising star for almost a year now, dating back to his triumph over Donald ‘Cowboy’ Cerrone at UFC Gdansk.

The two men have a mutual respect for one another as we’ve seen, but all of that will go out of the window in Texas. It’s been an interesting journey to get to this point with Till proclaiming that he wants to be known as the greatest of all time, whereas Woodley continues to search for the respect that he feels like he hasn’t received at times during his tenure as champion.

Whatever happens this weekend, it seems like a virtual guarantee that there will be fireworks of some kind to reflect on in the aftermath.