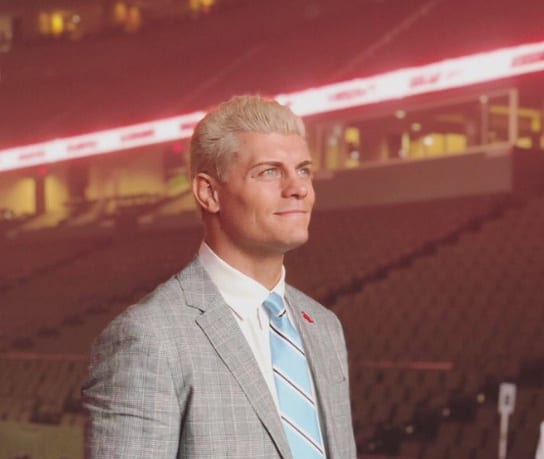 In the wake of All In’s success, Cody Rhodes has taken to Twitter in order to reflect on the event – and in doing so, he’s revealed that he’s hoping to be an executive producer again at some point in the future.

The show, which took place at Sears Centre this past weekend, served as proof that pro wrestling is healthier and stronger than it has been in a long time. Over 10,000 fans packed into the arena, and they were rewarded with one hell in a show featuring the best talent on offer outside of the WWE.

Cody was at the forefront of the operation alongside The Young Bucks, and he clearly enjoyed the change of pace that came with that.

24 hours removed and I can’t stop smiling. One passion led to a new one. I hope it wasn’t my only night as an executive producer. Thanks Matt & Nick for producing it with me. You’re fearless and it was a fearless show. pic.twitter.com/53Fcg4xX3o

Cody’s journey to this point has been a great one, with the former Intercontinental Champion overcoming a series of different obstacles in order to help put on one of the most important shows in recent years.

To top it all off he managed to win the NWA World Heavyweight Championship at the event, with many fans praising the fact that he didn’t compete in the main event. Instead, that honour went to The Young Bucks.

Rhodes has always been someone who has a deep passion for professional wrestling and it doesn’t seem as if that’s ever going to change. At the age of just 33, he still has many years left to grow both as an in-ring performer and behind the curtain, and we can’t wait to see where this journey goes from here.