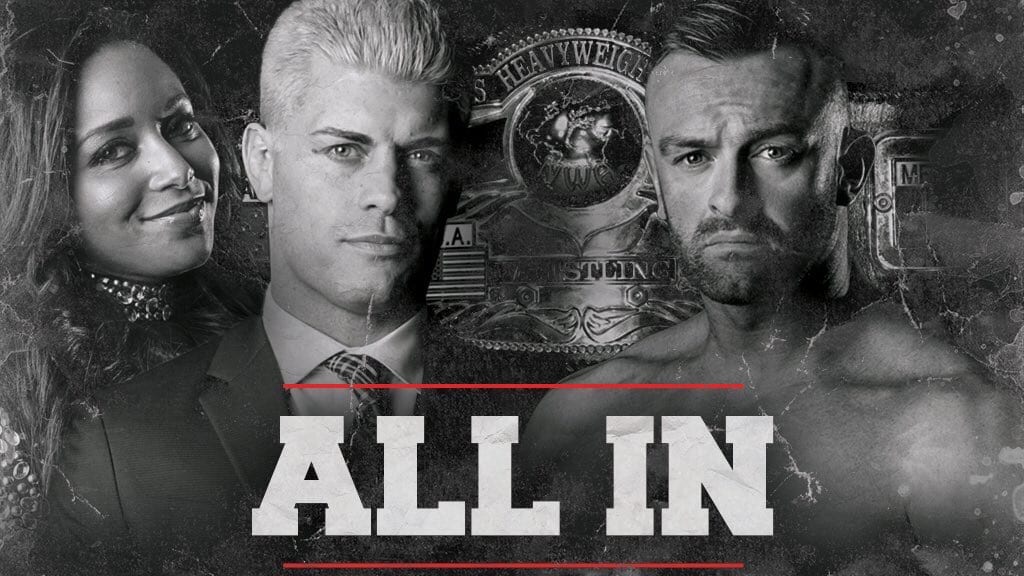 Cody Rhodes was led to the ring by Tommy Dreamer, DDP, Glacier, and his dog Pharaoh. The goal was to defeat Nick Aldis for the NWA World Heavyweight Championship at All In.

Legendary referee Earl Hebner officiated the match and these two guys went all out at All In.

Cody landed a dive early on, but later on Aldis caught him with an elbow on his second attempt. Hebner called for the dreaded X meaning Cody was injured.

DDP came down to talk to Cody instead of medical personnel. He checked on Cody and got him to his feet. Shawn Daivari came down and shoved DDP and took a Diamond Cutter with Cody still on the outside.

Aldis picked up Cody and he was a bloody mess by that point. They fought on and carried through with the match. Cody missed a moonsault and Aldis took control of the match after that hitting an avalanche blockbuster but he didn’t cover. Instead he went to the top rope to hit a splash for a two count.

They continued to fight on and Cody locked in a figure four leglock but Aldis reversed it. Aldis hit a running powerslam on the outside and Cody sold his back later on where he failed an Alabama Slam in his first attempt.

Brandi Rhodes told Cody he didn’t need to do it, but he carried on. Aldis nailed a pile driver and went up top again. Brandi went in the ring and begged for Aldis not to carry on and she covered her husband as Nick Aldis bailed her with a top rope elbow drop. This drew incredible heat and “assh*le” chants.

Cody hit a Crossroads, but Aldis kicked out at 2.

Suddenly, Aldis went for a sunset flip and Cody revered for the 3 count to become the new NWA World Heavyweight Champion.