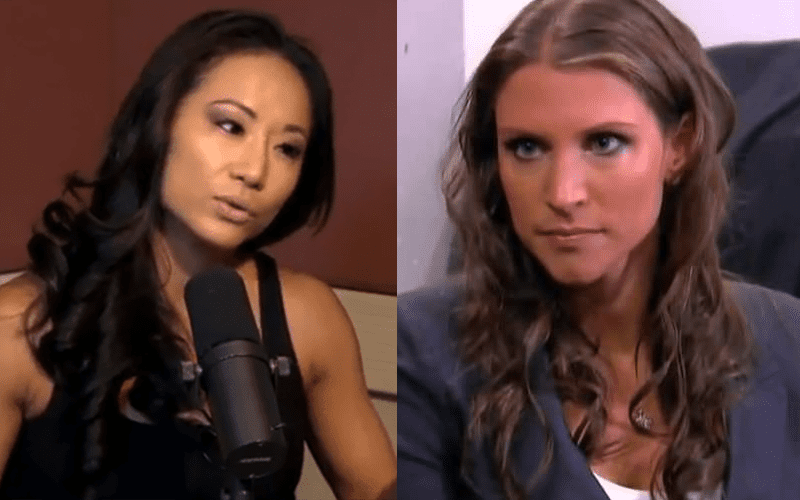 Gail Kim is in Chicago, Illinois for Starrcast as part of All In week. During her time there, she was interviewed by MLW Radio’s Press Slam where she addressed her comments on WWE Evolution, insinuating Stephanie McMahon is fake.

Kim first explained that she loves many of the women in WWE but is not a fan of the idea that McMahon is wanting to start a revolution when McMahon never helped her when she was in the company and never mentioned it before. To Kim, she believes McMahon may not exactly be genuine.

“For me, it wasn’t really like- I want the girls there; I love all the girls there that are in WWE. I mean, I haven’t met all of them obviously because I’ve been gone a long time, but wrestling is a small world. I’m a fan of some of these girls and I support them. I want them to do what I couldn’t do there. I’m happy for them.

“But then when- it’s just for me, I don’t like the fact that Stephanie McMahon will all of a sudden say like ‘women power’ and ‘the revolution’ but she has been there the entire time. Like why are you just completely changing your mind and dismissing the fact that you’ve never spoke of this before? That’s the part that I don’t like. But I get that that’s business, that’s marketing. That’s the time- the era of right now. I understand why it is happening, but I don’t particularly agree with it- in terms of her being so for women power when she wasn’t before.”

When asked to comment on what she felt the trigger was for WWE with the women’s evolution, Kim revealed she believes time played a large factor. Additionally, Kim noted that women’s wrestlers deserve equal pay and should have got paid for having the main event spot at the Royal Rumble earlier this year.

“Well definitely the time. The fans asked for the Divas to have a chance. I remember that clearly, and I remember Vince responding and saying, ‘We hear you.’ I mean- but we are making steps towards the right thing and they’re doing the right things in terms of actually using the women now and hiring a lot of women now, but the next step is for them to get paid equally. If they have the main event spot of the Royal Rumble, then they should be paid accordingly. I’m not sure if it’s happening, but I’m gonna have to say I doubt it.”

Finally, Kim was unsure as to whether she would accept a WWE Hall of Fame induction.

“Listen, yeah I don’t want to wrestle there ever again. Obviously because I’m retired [being the] number one [reason]. But even if I had a match or two left in me I don’t see the point in- you know, a lot of people- these WWE diehards get really upset about that- in terms of them thinking I’m insulting the company or something like that. But I don’t think anyone in their right mind who had two bad experiences in the same company- who would go back for a third time? I kind of left my career on a happy note so why would I go back and take a chance of having those people who didn’t treat me well- have that be the last reminder to the fans of what they remember of me. That is a question that would have to be crossed if it ever happened.”

What is your personal belief here? Do you agree or disagree with Kim? Let us know in the comments down below.