PCO has had a career resurgence over the last couple of years, after developing a new character and building his social media presence through insane videos. He points out that the reaction he’s received has been overwhelming, adding that the recent upswing in independent wrestling has given him the biggest break of his professional life.

He notes that with this “Frankenstein” gimmick, he had to totally fully invest himself in it. If you’re not fully invested in that type of gimmick it’ll never work. In a famous match against Walter, his chest was black and blue from chops and that picture has been floating around online ever since. He notes that the chops didn’t really bother him, and he thought that match had great drama. He informs that the crowd went insane for his big moves at the end of that match, and his career has been crazy ever since. 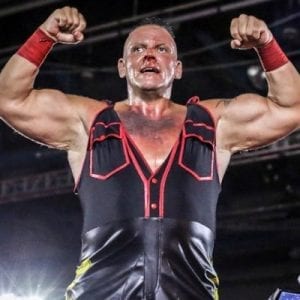 PCO informs that every time he enters a locker room now he acts like he’s a rookie. His goal is to leave it all in the ring and crush it every night because whether you have a good gimmick or not, independent fans won’t buy it unless you can work in the ring.

X-Pac asks PCO if he’s planning on working any big events in Montreal, Canada in the near future. PCO informs that IWF will be having its 20th anniversary in Montreal next March, and they’re reportedly trying to get Chris Jericho to work with him at that show. He’s not sure if it’s going to work out given Jericho’s schedule, but he’d love to work with Jericho.