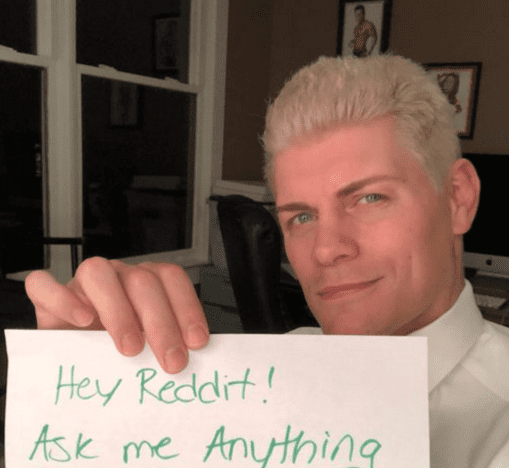 Cody Rhodes took part in an “Ask Me Anything” event on Reddit and he had plenty of people flood the thread in order to ask The American Nightmare a question.

There were several questions, but we’re just going to list to most notable ones below to save you the time.

Cody was asked, “When you were in Legacy together, how frequently did you shake Randy Orton’s hand?” Rhodes simply replied: “We hugged.”

Rhodes also revealed that Houston was a strong consideration for the first All In event when someone asked him to throw next year’s show in Texas.

He was asked about bringing in Euriopean talents for All In like Ilja Dragunov or Lucky Kid and Cody replied, “One issue with talents from outside countries was visas… the three of us were not versed in how that works properly. Securing the Canadian and Japanese ones were rather difficult. Lesson learned though.”

Cody confirmed that Flip Gordon is NOT All In so if we’re expecting to see him then we’ll be disappointed, “Dude is great he just didn’t make the cut.”

Rhodes also said that he initially had Marty Scurll doing a “singing segment” at all in, but Nick Jackson pushed for him to have a match with Kazuchika Okada instead.